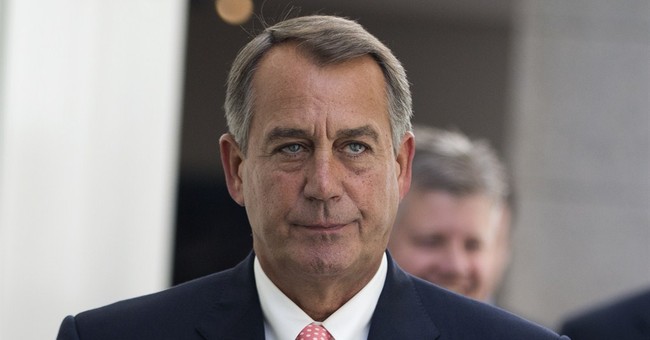 **See Updates: A temporary government shutdown is now expected, as the two chambers have reached an impasse. House Republican leaders could not muster the GOP votes for a "clean" temporary budget, and Senate Democrats killed every GOP offer. This guide to "shutdown" is more relevant than it's been in nearly two decades. **

The next House CR vote will occur any moment. This version of the spending package would (a) keep the government open by funding its operations at BCA-mandated levels, (b) delay Obamacare's unpopular individual mandate tax by one year (rather than the entire law), an idea has attracted bipartisan support in the recent past, and (c) includes the "Vitter Amendment," which explicitly rejects the Obama-orchestrated sweetheart deal for member of Congress and their aides. The Democrat-held Senate will almost certainly kill it, though Harry Reid's members will have to go on the record opposing these popular ideas. Once the Senate strips out the Obamacare-related provisions, they'll ping a "clean" CR back to the House. At which point, things get interesting because Republicans will have some tough decisions to make with the clock winding down:

What may matter even more than CR vote: the next expected evening House GOP conf mtg, where it cld be clean CR vs another O'care ping


So, do they pass the clean CR -- which, again, would continue to fund the federal government at GOP-preferred levels -- or do they opt for some other plan? Their potential remaining options are pretty limited. Either they send yet another CR with certain strings attached to the Senate (perhaps their "smallest" ask to date, which could anger House conservatives), or they shut the government down. How long such a partial shutdown would last is unclear, as the politics would remain quite fluid. Some rank-and-file moderates are getting frustrated by this endless parade of votes. They realize that a shutdown would be wielded as an effective political cudgel in swing districts, so they may be willing to go along with the "clean CR" option. Boehner may in fact seek to persuade a majority of his caucus to join that coalition in the wee hours of the morning to head-off a shutdown. Questions everywhere: Would he need to firm up support for that option, or are the votes already there? And how would conservative members react? Would Boehner's Speakership be in jeopardy? On that last one, I don't think so...unless he brooms the 'Hastert Rule' and allows a minority of House Republicans to join with Democrats to pass the CR; then things could get dicey. Pelosi has indicated that she'd help whip her caucus to provide the necessary votes. Republicans in the House have stayed remarkably united over the last few days, but the acrimonious splintering could occur then push finally comes to shove. Stay tuned for updates...


UPDATE - The House has passed their latest iteration of the CR 228-201, with all but 9 Democrats voting to protect the mandate tax and their own special treatment under the law. A dozen Republicans voted with Democrats -- some because the bill was too watered down, others out of frustration with the endless votes. The Senate is poised to kill the government-funding mechanism immediately:

Senate Dem aide: Within about an hour of the Hse vote, the Senate will send our clean CR to the House, stripped of whatever amdts they add

King predicts "at least two" more back and forths on CR before a clean one can come to house floor. "Gonna be a long night" he says.

UPDATE III - That's all folks? It sounds like the House will vote to send its CR off to a conference committee with the Senate -- resulting in a shutdown in the meantime, as both sides haggle over a final outcome. House leadership realized its members wouldn't abide a "clean" CR, so this is their last available play. But Harry Reid's Senate is planning to reject it immediately, leaving things...where?


This is how the GOP will try to message the temporary shutdown:

The new GOP talking pt tmw: Reid shut it down b/c he refuses to compromise, we're bringing him to the table w/ conference