"Most Likely...I Will Announce That I Am Running Again" 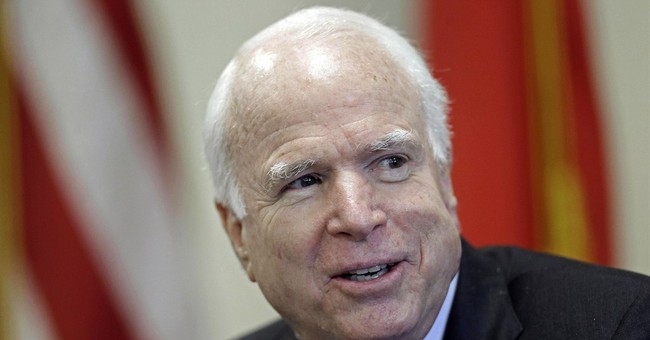 We thought John McCain might say that. And to be clear, he hasn’t officially declared anything just yet. But can there be any doubt now that he's not going away?

John McCain says he is "most likely" running for re-election in 2016, but is aware that he will be a top target for conservative groups gunning for establishment Republicans in primaries. In an interview with CNN, the Arizona senator stepped closer to pulling the trigger on a campaign for a sixth term and seems to be spoiling for the fight. But he also said he's not sure Republicans can hang on to the Senate in two years after grabbing it back from Democrats in the midterm elections.

"I am approaching it, that decision, and it's most likely that I will announce that I am [running] again," said McCain, who will be 80 at the time of the 2016 election. McCain had previously said he was considering and "leaning towards" a campaign but would announce his intentions in early 2015.

Eighty? Somehow, he doesn’t have as many years in Washington under his belt as Teddy Kennedy, but he’s sure getting close. Apparently, however, 30 years in the upper chamber isn’t enough. He’s probably running again.

But can an 80-year-old barnacle like Sen. Maverick, a guy who enjoys trolling the Right and once referred to two darlings of the tea party as “wacko birds,” really defeat a younger, more conservative challenger?

At the very least, victory won’t come easily, if it comes at all.

"I will be at the top of the list, there is no doubt about that," McCain told CNN later in the interview. "I expect a vigorous campaign. For me to expect anything else would be foolish. And I'm not foolish."

Indeed not. But he may end up looking foolish if conservatives field a better, more conservative candidate who can make a compelling case for why it’s finally time for him to retire. They certainly have their reasons.