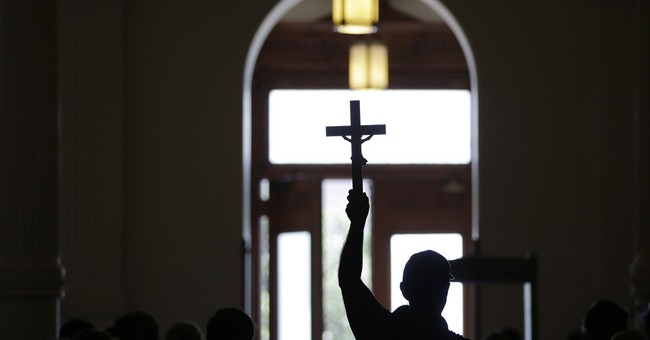 A Sonoma State University student has filed a religious accommodation request after she said she was ordered to remove her cross necklace because it might offend other students.

“It’s amazing in this day of diversity and tolerance on university campuses that a university official would engage in this type of obvious religious discrimination,” said Liberty Institute attorney Hiram Sasser.

The Liberty Institute is representing Audrey Jarvis, 19, a liberal arts major at the northern California university.

On June 27, Jarvis was working for the university’s Associated Students Productions at a student orientation fair for incoming freshmen. During the event, her supervisor directed her to remove the cross necklace.

Sasser said the supervisor told her that the chancellor had a policy against wearing religious items and further explained “that she could not wear her cross necklace because it might offend others, it might make incoming students feel unwelcome, or it might cause incoming students to feel that ASP was not an organization they should join.”

“My initial reaction was one of complete shock,” Jarvis told Fox News. “I was thrown for a loop.”

Jarvis said she is a devout Catholic, and she wears the cross as a symbol of her faith in Christ.

“I was offended because I believe as a Christian woman it is my prerogative to display my faith any way I like so long as it is not harming anyone else,” she said. “I was very hurt and felt as if the university’s mission statement -- which includes tolerance and inclusivity to all -- was violated.”

On a second encounter, her supervisor told her she should hide the cross under her shirt or remove it.

At that point, Jarvis became so upset she left her student worker job early.

Sasser, who is representing the college student, said the university should apologize for its actions.

“It’s unfortunate there are university officials out there who think that it’s okay to tell Christians to hide their faith -- but would cringe if somebody said the same thing about hiding someone’s pride in whatever political or cultural affiliation they may have,” he told Fox News.

He said the law is clear on the matter -- "state employees may wear crosses while they are performing their duties as long as the wearing does not interfere with the employees' duties or harm the employer's business interests."

“Someone who works here was concerned that the cross might be off-putting to students who are coming to campus for the first time,” she said.

“It was absolutely an inappropriate action for him to make that request of her,” she said.

Kashack said Sonoma State President Ruben Arminana was “angered” by the incident, and they are trying to contact Jarvis so they can apologize.

“The president was very upset about it and asked me to contact Miss Jarvis and give a profuse apology,” she said.

She said they have spoken with the employee involved in the incident but won’t reveal the contents of their discussion or whether he was punished.

“Things like this don’t happen here,” she said. “It’s very unusual. People here are very aware of discrimination. It’s possible that political correctness got out of hand.”

Audrey’s mother Debbie told Fox News she was devastated when she heard what happened to her daughter.

“She’s a strong Christian, a faith-filled young woman who spent her summers at Catholic camp,” Jarvis said. “She’s just full of the Lord.”

Audrey called her parents after she was told to remove the cross, and Mrs. Jarvis recalled an emotional conversation.

“She doesn’t wear the cross as a fashion statement,” she said. “It’s a statement of her faith.”

As she tried to console her daughter, Jarvis reminded her that “we are still one nation under God.”

“And she told me, ‘Mom, it doesn’t feel like that here,” Jarvis said. “Our faith was attacked. It’s unnerving. I know what’s going on in this country. I know Christianity is being attacked. Now, I know it first-hand and it sickens me and saddens me.”

Jarvis said it’s time for people of faith to take a stand.

“We need to band together as Christians and fight back,” she said.