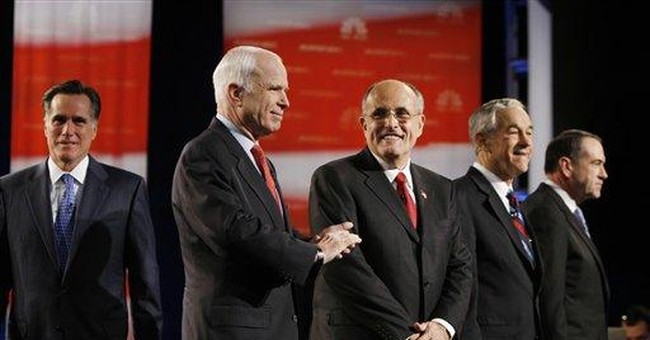 Bush the Elder coined that phrase to describe political momentum after his 1980 Iowa Caucuses victory over Ronald Reagan. And until this year, this axiom -- “Nothing gathers support better than a sense of inevitably” -- has held up.

If anything, this is the year of “nomentum” – the absence of a single candidate steamrolling to the respective parties' summer nominating conventions.

The electorate had become accustomed to candidates winning one primary state and then running the table. Certainly that was what most strategists and media-types thought would happen this year.

“I guess you could argue, for the Republicans, that both Mitt Romney and John McCain have some gas coming out of their wins in Michigan and South Carolina,” says Neil Newhouse, a Republican pollster not affiliated with any of the presidential campaigns. “But the reality is, this is a four-way race, with Florida as the showdown state.”

Florida is an interesting microcosm of the Republican voting universe at large: a Southern state with significant Northeastern and Midwestern influences, plus a big chunk of establishment Republicans and evangelicals. It’s a certified political melting-pot.

When the GOP-controlled state legislature moved the state’s primary to Tuesday – well ahead of the Feb. 5 date picked by both national parties – the Democratic National Committee and Republican National Committee retaliated. The DNC stripped all of the state’s convention delegates; the RNC took away half, still leaving it with the party’s biggest delegate cache of the primary season.

“It is actually the first state that the primary train has hit that has four candidates -- Huckabee, McCain, Romney and Giuliani -- having a plausible shot of coming out ahead in this race,” Newhouse says.

As for the Democrats, we basically see their first case of real heavyweights competing in Florida in a long time – two incredibly powerful people who have racked up incredibly potent endorsements.

Add to that the fact that Barack Obama is effectively running against both Clintons, Bill and Hillary; the former president’s formidable yet unpredictable presence is having a near-daily effect on the race.

“I think that you could argue that perhaps Hillary has the momentum on that side,” Newhouse says. “Her stunning win in New Hampshire, followed by the difficult yet profitable caucus win in Nevada, points in that direction."

Obama was very close to wrapping up the nomination in New Hampshire; had Hillary not wept there, this probably would be a more settled race for Democrats. (Maybe Democratic Party politics is all about emotion. After all, in 2004 we had the “Dean Scream” and now, in 2008, we have the “Hillary Cry.”)

While that cry served her well in New Hampshire, in the long run that kind of thing provokes voter fatigue.

And what about John Edwards? Nomentum, par excellence.

No doubt he is hoping Clinton and Obama spontaneously combust, politically speaking. They won’t, however, and sometime between South Carolina and Super Tuesday will be his last stand.

Clearly, Edwards not only enjoys the campaign trail, he seems addicted to it. It may be time for him to go back to North Carolina and run for governor.

According to Newhouse, “Any bounce that any candidate has had going into any state has worn off. Almost as soon as they get momentum, it wears off.

“This is definitely the anti-year for momentum.”

So, here’s the best recommendation for the presidential races: Watch, but do not bet.