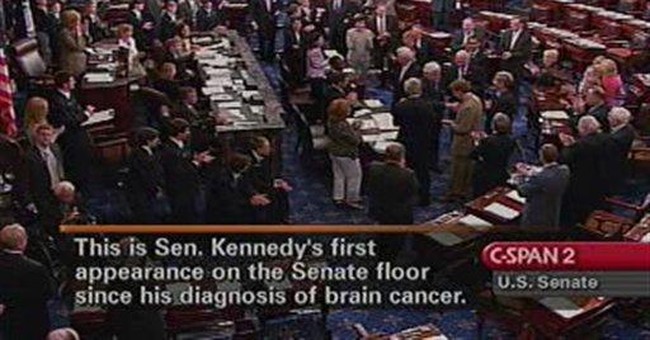 That’s true of individuals, who must decide whether to invest in stocks or bonds or simply to bury their cash in the back yard. It’s true of corporations, many of which are now going, hat in hand, to Washington for a bailout. And these days, Americans need it to be true of our federal government, too.

The big question isn’t “will our financial system survive?” It certainly will, in some form. In the long term the only way to go broke is to bet against the American economy, which will outlast the Chinese economy just as it outlasted Japan in the 1980s, Germany in the 1970s, Britain in the 1950s, and so forth.

No, the big question is whether our government can afford all the promises it’s making. Policymakers are throwing money around like never before, and may eventually even run out of cash to spend.

For just one example, see Andy Serwer and Allan Sloan’s piece in TIME magazine. In recent weeks, they write, the federal government absorbed Fannie Mae and Freddie Mac, instantly adding “more than $5 trillion -- yes, with a t -- of the firms’ debt onto taxpayers, nearly doubling the amount Uncle Sam owes to his lenders.” More bailouts -- or more economic stimulus packages -- will just mean more billions that we’re all on the hook for.

At times like these, belt-tightening is in order. Luckily, Washington can cut costs while also improving life for millions of Americans. The key is to reform entitlement programs.

Let’s start with Medicaid, the program Washington and state governments both participate in to provide health care to poor Americans. Over the next decade, governments at all levels are expected to spend $5.1 trillion (again, with a t) on Medicaid. But we as taxpayers aren’t getting what we’re going to pay for.

“Medicaid is a paradox,” analyst Dennis Smith writes in a recent paper from The Heritage Foundation. “It is criticized as both too stingy and too generous; com¬prehensive but incomplete; unreliable yet essen¬tial; too complex and too inflexible; a program that is both shunned and embraced by individuals and providers.”

The way to fix the program is to convert it into one that helps people buy health insurance instead of a program that buys medical procedures for patients. The overwhelming majority of people on Medicaid are healthy. They would benefit from being on a traditional health insurance plan, but they often can’t afford the premiums.

Using Medicaid dollars to provide premium assistance would help these people and create an insurance market that would grow over the years. It would turn Medicaid into a true insurance program (protecting people against sickness) instead of an entitlement program (buying things for people with taxpayer money). And it would save Uncle Sam billions, possibly trillions, in the years ahead.

Medicare, the federal program to cover the elderly, also needs critical reform. The trustees charged with managing the program forecast it will cost $85.6 trillion in the decades ahead, a number six times larger than our entire national economy today. And that figure almost certainly understates the problem, since it assumes that payments to doctors will grow less quickly than they have in recent years.

Again, the solution is the market. Instead of serving as a single-payer and buying medical care for people, Washington should use Medicare dollars to help recipients buy their own insurance. That way, they’d be able to shop around, switching plans or companies whenever a better deal was available.

A thriving health insurance market would only serve to drive prices down, which would benefit consumers and taxpayers -- in other words, all of us.

As economist Herb Stein once put it, “if something cannot go on forever, it will stop.” The economic turmoil on Wall Street must stop, and it will. Our government’s big-spending ways must stop, as well. There’s simply no way future taxpayers will be able to afford all the promises today’s policymakers are making through Medicare, Medicaid and Social Security.

The time to fix our federal financial house is now -- before the completely predictable entitlement crisis overwhelms Washington, today’s lender of last resort.