Paul Jacob
|
Posted: Sep 09, 2018 12:01 AM
Share   Tweet
The opinions expressed by columnists are their own and do not necessarily represent the views of Townhall.com. 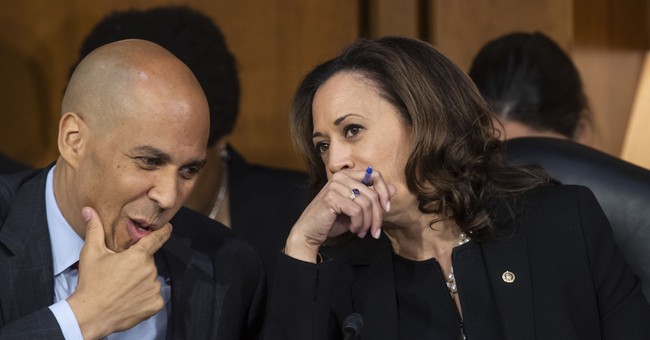 Once upon a time, Corey Anthony Booker seemed like “a statesman.” As mayor of Newark, New Jersey, he talked to everybody, made deals, comported himself with dignity. He stood out from the pack; he was seen as an up-and-comer.

Yet move him to the Senate and place him in front of national cameras? He has become something of a loon.

“This is about the closest I’ll probably ever have in my life to an ‘I am Spartacus’ moment,” he said, referring to his leakage of confidential information about Supreme Court nominee Brett Michael Kavanaugh during this week’s hearings.

Senator Booker was confessing so brazenly that he was almost asking to be punished. For a minor breach of protocol. But the moment in Stanley Kubrick’s Spartacus he was referring to is one where a group of slaves all claim to be the rebel slave, Spartacus. Booker mostly missed the point of a great movie scene. But that wasn’t all he missed, considering that the information he leaked (a) had in fact been previously released to the public, hours before, and (b) showed precisely the opposite of what he wanted.

Yes, Booker was trying to reveal Kavanaugh as a racist, advocating for racial profiling. The released emails showed that Kavanaugh was against all such profiling. Booker’s “leak” actually made Brett Kavanaugh look good.

Funny, in a cringe-inducing sort of way, as when someone tries to tell a mildly risqué joke at a church social . . . and flubs it.

He can console himself, though: Booker is not the only Democrat to take a stand and end up looking the lunatic.

Also at the hearings, Senator Dianne Feinstein demanded that Mr. Kavanaugh “reconcile” his reasoning on the Second Amendment “with the hundreds of school shootings using assault weapons that have taken place in recent history.” This did not immediately appear to many people as quite so ludicrous as Booker’s silliness, but only because law is not as widely understood as movie criticism.

Bottom line: there haven’t been “hundreds” of school shootings in recent years — that is just a matter of fact — and those shootings do not have much of anything to do with Kavanaugh’s application of the Heller decision, the subject of Feinstein’s inquisition.

Sure, not as funny as Booker’s botch. But what’s going on here? These are smart people. Why are they acting as if mentally challenged?

Why do they make so little sense?

Answer: because they don’t have to make sense.

They are playing, after all, to the Democratic base of loudest activists. And, if we can judge by the activists invited to witness the hearings, these activists are crazy in the extreme.

While radical Islamist/feminist Linda Sarsour demanded that the hearings be canceled and asserted that the hearing were “a mockery and a travesty of justice” — which is not exactly untrue, considering her own nonsense and that of Booker and Feinstein, et al. — the feminist who followed her took obnoxiousness up another notch. She warbled incomprehensibly as she was removed from the hearing.

If your idea of influencing politics is to go to a Senate hearing and ululate incomprehensibly, then obviously you don’t really demand brilliance — or even coherence — in your representation. You just expect your team to show up and “take a stand.”

Inevitably, much of the ire has to do with abortion. And, at the Rise Up for Roe rally in New York, Chelsea Clinton rose to the occasion to play the sage of the penthouse set.

“The net, new entrance of women” into the workforce, she thoughtfully reminded her Rise Up for Roe rally attendees, “is not disconnected from the fact that Roe became the law of the land in January of 1973.”

Similarly, the fact that Southern plantation owners had slaves was not disconnected with the wealth of the South — and the North — prior to the Civil War. (It’s worth remembering that said wealth was pretty much destroyed in that war. But that’s another, if not unrelated, story.) What’s important to note is that women working in the marketplace, no matter how good that may be, cannot justify a crime, or the crime of abortion.

That is, the possible good effects of a policy cannot justify said policy regardless of other effects, any more than the prosperity of plantation owners excused slavery.

Making these kinds of distinctions is what making sense in law and jurisprudence is all about. A lot of us want it not merely in Senate hearings, but also, more broadly, in politics itself.

We can hope that the broader American electorate — including non-crazy Democrats as well as the swelling ranks of independents — will demand something like reason in our political debates. Maybe the next slogan should be: