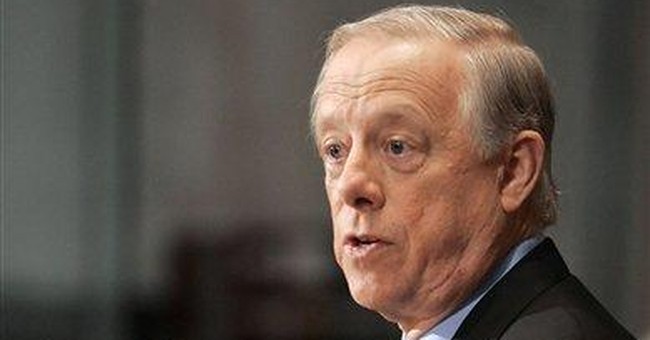 Isn't that what they always say, they being state and local officials, and the money being federal grants?

We, as in We the People, aren't supposed to notice the strings attached to federal funds, or the unintended consequences that may result from taking them.

Maybe every federal grant should come with a warning label: Taking this money could have deleterious effects on your fiscal health.

Consider the offer of increased federal funding for states that agree to expand their unemployment benefits. A state can't lose on a deal like that, right?

Wrong. Because the states would have to increase their benefits permanently; the stimulus package lasts only two years.

Those states that take the money might also have to provide benefits for a lot of folks who now don't qualify for them.

Tennessee's governor, Phil Bredesen, noticed the catch. "We are evaluating this piece of money," he says, "whether it makes sense for us to take it."

Tennessee is having problems raising enough money to pay the unemployment benefits it offers even now. What'll it do if it has to provide more?

To quote Gov. Bredesen, "We're in the position of going back to our legislature this year for changes in our tax structure just to keep our fund whole, and taking it to a new level may be too much of a lift for the legislature this spring."

Georgia's governor, Sonny Perdue, also had problems with this "free" money. Because accepting the federal funds now might require his state to raise taxes when the money runs out after a couple of years. "We won't compromise," he says, "if we're left with filling a hole that requires higher taxes for Georgia businesses at the end of it."

Maybe the additional benefits would still leave a state ahead of the game, but maybe not. Should a state government concerned with staying solvent take the gamble? And in this economic climate, does it make sense to raise taxes on small business even more?

Look at how state government in California has managed, or rather mismanaged, its California-sized problems. Mainly by promising benefits it couldn't afford, then holding circus-like emergency sessions of its legislature when the bubble bursts. They've always said California is the wave of the future. It's starting to look like a tidal wave.

Nor is Louisiana's businesslike governor, Bobby Jindal, rushing to accept this "free" money from Washington. He prefers to look first, leap later -- if at all.

This generous offer from Washington ("I'm from the federal government and I'm here to help!") has been welcomed warily, or just flat-out turned down, by one skeptical governor after another. Because it sounds like the bureaucratic equivalent of a Trojan Horse -- attractive from the outside, full of danger within.

Over in Oklahoma, Gov. Brad Henry calls it a Catch-22. If he doesn't accept the money, he's sure to be denounced as a mean ol' skinflint -- and a dumb one -- for passing up freebies for the unemployed in his state. If he takes the bait, he might have to skimp on unemployment benefits in the future -- or tax employers more to meet the burdens that come with this "gift."

And the more employers are taxed, the fewer employees they can afford to keep. Maintaining payroll is a big enough challenge these days. Many a company has gone beyond cutting fat; they're cutting into bone.

Texas' Rick Perry has told President Obama that, if this found money actually increases the entitlements his state will have to pay, "we will not accept." Gov. Perry says that's "exactly how addicts get hooked on drugs." A big high at first, a bigger letdown later.

Mississippi's governor, Haley Barbour, an admitted Republican, is looking at this gift horse warily. Because it would require the states to come up with money to fund the enlarged program, he calls it "a tax on job creation."

Lest we forget, states compete with each other for industries that create jobs. The higher the taxes in a state, the less likely a business may want to put a plant there.

So many federal programs are like this one: They sound great but may not be so great in practice. Once again the states might be left having to pick up the bill for what used be known as Unfunded Federal Mandates -- an awkward phrase, but one that's easier to take than the cost of these obligations that the feds are always attaching to their benefits.

And the feds can be unforgiving when it comes to following their rules and regs, maybe right over a cliff. Remember the late great Hyman Rickover? That maverick admiral had his own struggle with the bureaucrats at the Pentagon when he was trying to get the nation its first nuclear sub. His well-founded advice: "If you're going to sin, sin against God. God will forgive you, but the bureaucracy won't."

The moral of this story: Think before grabbing.