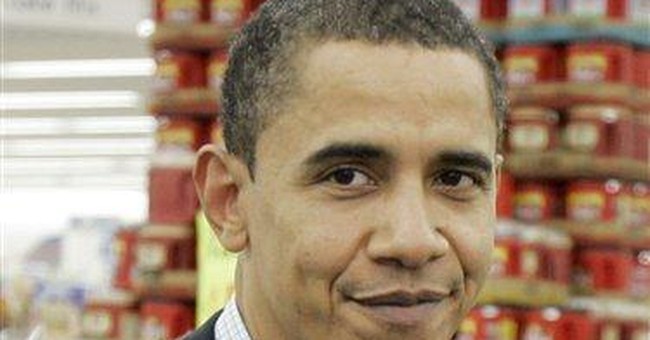 Why do politicians pride themselves on being working class, or at least having working-class origins? For the same reason 19th-century presidential candidates were almost required to have been born in a log cabin. Seven of them actually were. Then there were those who would like to have been for political purposes. It was a way of identifying with The People.

The People, not The Masses. In this country, we don't have Masses, unless you write for the Daily Worker. It would be un-American.

Also unrealistic. Americans may be farmers, but we've never been peasants. (Slaves, maybe.) It probably has to do with having skipped the feudal period. The very first Europeans to observe this strange new species of man in the New World tended to comment on our lack of subservience. Which cheered some, but horrified others.

"What then is the American, this new man?" Crevecoeur asked in his "Letters from an American Farmer" (1782), and answered: "He is an American, who, leaving behind him all his ancient prejudices and manners, receives new ones from the new mode of life he has embraced, the new government he obeys, and the new rank he holds. He has become an American by being received in the broad lap of our great Alma Mater. Here individuals of all races are melted into a new race of man, whose labors and posterity will one day cause great changes in the world."

A forerunner of Tocqueville when it came to analyzing/diagnosing this new kind of man, Crevecoeur tried to sum us up, but it's an impossible job. If we left behind old prejudices, we soon acquired new ones. And we've turned out to be less a new race than one that hasn't congealed yet, and may never, what with new ingredients being added all the time. Let's hope not.

It's always been a myth that America is a classless society, though it's a myth that has its uses. For what begins in myth may end in reality. If we pretend class doesn't matter, maybe one day it won't. At least not as much. Let's just hope we never reach the point of glorifying poverty, of extolling downward rather than upward mobility.

But romanticizing the poor has always been a staple of American discourse. William Henry Harrison, he of Tippecanoe and Tyler, too, used the log cabin as his campaign emblem. And he set the fashion.

Working class may be a term of opprobrium in some societies; here it is a term of approbation. At least publicly. It's the one class Americans feel free not only to recognize but laud.

A presidential candidate (Hillary Clinton) can risk sounding like a sociologist as long as she's identifying herself with the working class. Or at least claiming that it identifies with her and not her opponent. As when she asserted that "Sen. Obama's support among working, hard-working Americans, white Americans, is weakening again," while whites "who had not completed college were supporting me." At least she didn't use euphemisms like "blue-collar majority.''

It's hard to imagine a presidential candidate, at least one with any political sense, running as the Candidate of the Upper Crust. ("I was born in a plush penthouse on Park Avenue.") Instead the lower crust is shamelessly flattered. It's the contemporary version of the old log cabin theme.

Something else hasn't changed: Much as the Andrew Jacksons and William Henry Harrisons extolled log cabins, they weren't about to live in one. Any more than today's politicians are about to take a vow of poverty.

I live for the day when some politician comes out and admits that, while being poor is no shame, it's no great honor, either.