Mike Adams
|
Posted: Oct 18, 2019 12:01 AM
Share   Tweet
The opinions expressed by columnists are their own and do not necessarily represent the views of Townhall.com. 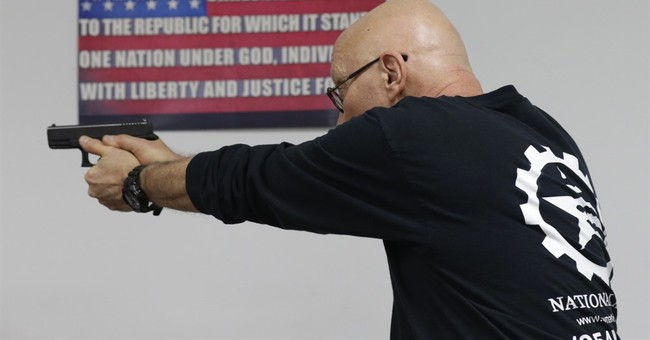 Recently, a deranged leftist (pardon the redundancy) got angry with me for talking publicly about my firearms collection. Apparently, he not only opposes my ownership of guns but also does not want me to discuss them. In other words, he is one of those Beto O’Rourke leftists seeking to eviscerate both the First and Second Amendments. He even decided to write one of my bosses and petition for my termination after I refused to stop tweeting about firearms. So I am going to respond to his demands in the only reasonable way I can: I’m going to start writing about firearms more often to remind him that he is dealing with an alpha male, not a Beto male.

Censorious lunatics aside, I really should be writing more about firearms anyway. It has been awhile since I wrote a firearm recommendation column – and I know my readers miss them. Thus, for the first installation of my rebirth as an active Second Amendment advocate, I plan to answer the most basic of all firearm questions, which is: “Which firearms are so essential that every man must have them in order to avoid forfeiting his man card (and thus becoming a Beto male)?”

My answer will surprise many readers and it will likely disappoint a few. However, there are actually only three firearms each man must have in order to fully identify and function as a man. They follow in their exact order of importance:

1. Remington 870 Express HD (Home Defense). A man’s first duty is to protect his home and the people lawfully inside it. And there is no better way to do that than with a 12-gauge shotgun. I always prefer a pump shotgun because the sound of it racking is potentially enough to keep from having to use deadly force. After a burglar hears that sound, it is quite possible that you will be cleaning fecal matter rather than blood off of your carpets. And that’s a good thing because having to make a claim of self-defense involves hiring a lawyer and potentially standing trial. It is far better to protect your family without harming anyone in the process.

Readers should also note that these Remington 870s are versatile because they give you the advantage of using different easily interchangeable barrels. Thus, you can start with the standard 18-inch home defense barrel and then add a 23-inch fully rifled slug barrel for deer hunting. You can also add a 26-inch choked barrel for hunting birds and small game. Thus, one gun becomes several and a man can defend his home and feed his family – even before he makes his second firearm purchase.

2. Glock Model 19. A man’s second duty is to protect himself and his family when they are away from home. That means he needs to have a concealed carry permit – and, of course, he needs a gun that is both lethal and concealable. This Glock 9mm gets the job done. It has a15-round magazine capacity but it is small enough to be concealed under a man’s un-tucked shirt or in his wife’s purse should she need to carry it.

Furthermore, women tend to feel comfortable shooting the 9mm so there is no need to drop down to a .380 or something less lethal. This should be your first handgun because it is something man and wife can both use that can get the job done. Obviously, you will want more than one carry weapon in your family but remember: this column is a starting point column focusing on bare essentials.

3. Ruger 10/22. Consistent with his moral obligation to protect his family, a man has a responsibility to raise children who are capable of hunting and eventually protecting themselves. That learning process begins with a .22 rifle. I started on a Marlin bolt action but I have come to absolutely love the Ruger semi-auto. Mine is a tactical version with a built-in laser light fed with a handful of 25 round aftermarket magazines. But the standard 10/22 is all a man needs to teach his kids the love of firearms. It is an inexpensive gun that is fed by inexpensive ammo. More than anything, it is just fun to shoot. But, in a fix, it is capable of killing small game or being used for limited defensive purposes around the home.

Well, this concludes my thoughts about what a man needs in his basic firearm collection in order to keep his man card. Our next column installment will begin to move into the realm of what a man will want once he has taken care of his most basic firearm needs. And this is where my unhinged progressive (pardon the redundancy) readers will really start to get triggered (pun intended).

So if you are presently trolling my column and wishing to get me fired, don’t bother. The UNCW administration can’t do a damn thing about me. Just go ahead and make a donation to Beto 2020. Maybe if he gets elected, he can be the one to stop me from buying guns and even daring to talk about them.

Until then, enjoy the series. Proceeds from these columns will be used to buy additional firearms and further drive my progressive critics crazy. Of course, it’s a pretty short drive from progressive to crazy. Most could get there on their mopeds.