Mike Adams
|
Posted: May 13, 2019 9:52 AM
Share   Tweet
The opinions expressed by columnists are their own and do not necessarily represent the views of Townhall.com. 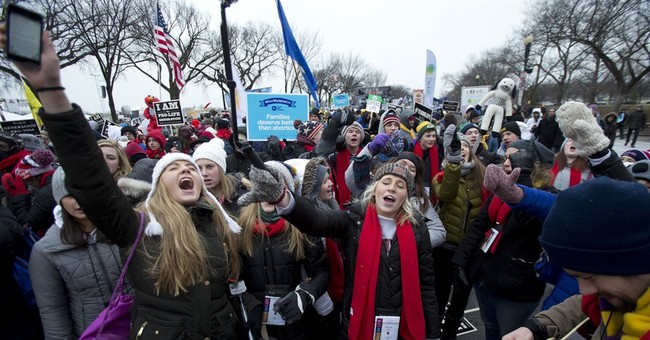 Feminists often decry the “fact” that women earn 77 cents for every dollar a man makes. Despite the flaws in the studies upon which this statistic is based, the idea of treating a human as less than four-fifths of a person appalls them. Similarly, while ignoring political context, feminists decry the “fact” that our founders were racists by complaining that they considered blacks to be three-fifths of a person. Yet feminist administrators at UNC-Wilmington (a.k.a. “The Dub”) recently ruled that conservative women are less than one-half of a person. Unlike the feminists, I can bolster that accusation with facts and appropriate political context.

Last August, a conflict emerged between a feminist administrator and two conservative women – one an alumna and the other a student. The feminist administrator ran the Women Studies Resource Center (WSRC) until she recently resigned in the wake of the conflict, which has now resulted in a federal civil rights complaint. The initial conflict was over the question of whether the WSRC would fund an abortion debate sponsored by a Christian organization. It was doubtful they would, given their long herstory of only sponsoring unequivocally pro-abortion events.

The conservative alumna and the conservative student made a direct request for funding of the debate and were told by the feminist administrator that abortion is a “women’s issue” and that the debate could not be funded because the debate participants were “both male.” When I found out about this, I was incensed. I was one of the proposed debate participants. The other was abortionist Dr. Willie Parker. (That debate eventually happened and you can watch it by clicking on this link).

It will come as no surprise to readers that I did not take this laying down. I decided to file a formal Title IX complaint since the funding for my speech was denied on the basis of my gender. I was one of the males subjected to discrimination. So I had standing as the complainant. The two conservative women were the ear-witnesses to the discrimination.

But the Title IX Office did not see it that way. They decided to switch our roles, which made me a witness and the women the complainants. The reason they did that was obvious: They wanted to claim that FERPA prevented me from accessing all evidence related to the investigation. This was an intentional misapplication of the law by the UNCW administration for the sole purpose of protecting the WSRC director – who would be in clear violation of federal law if the two conservative women were telling the truth.

The Title IX investigation, which they sought to conceal by unlawfully swapping witness and complainant roles, was indeed a simple one. The university should have concluded it in the 60 days allotted by law. But they missed the 60-day deadline. Then they granted themselves another 60-day deadline. After they missed that deadline, they granted themselves an indefinite extension. Then, they restarted the entire investigation. Naturally, this caused them to miss the third (and undetermined) deadline.

In a nutshell, UNCW repeatedly violated procedure in an effort to hide the obvious fact that one of their administrators was violating Title IX by engaging in blatant sex discrimination. They could not bear to admit that the office they established to fight sexism was engaging in sexism. They were hesitant to fire a feminist administrator for advancing rather than fighting gender discrimination.

But reality caught up with UNCW. In the midst of the investigation, which stretched on for over two hundred days, the director of the WSRC announced her resignation. UNCW feared their WSRC director was a legal liability – not because she was a sexist but because she was not shrewd enough to hide it. So the university ultimately conceded wrongdoing, right? Wrong.

On May 7th, nearly seven months after the complaint was filed, the university Title IX Office issued this ruling:

The university has concluded its fact-finding review of the gender discrimination complaint against the Women's Studies Resources Center and the director, (name withheld). After careful consideration of all facts, the fact finders were unable to substantiate a violation of university polices by a preponderance of the evidence. However, in the course of this inquiry, concerns were raised about the governance of the organization that will be addressed by university leadership.

We ask that you maintain confidentiality of this matter and refrain from discussing it with anyone at UNCW other than those who have a business to know. If you have any questions related to this matter please contact me at (number withheld).

This is a stunning admission, given that two women accused one of engaging in sex discrimination. There were only two possible outcomes. Let’s walk through both:

1) The feminist director of the WSRC admits that she denied funding on the basis of gender. Therefore, all three witnesses to the conversation over funding are in agreement. Since preponderance of evidence is a “probably” or “more likely than not” standard, the standard is satisfied by the evidence.

2) The feminist director of the WSRC denies that she denied funding on the basis of gender. Therefore, two of the three witnesses to the conversation over funding are in agreement. Since preponderance of evidence is a “probably” or “more likely than not” standard, the standard is satisfied by the evidence.

This is all simple logic. The preponderance standard could only not be met if one concludes that two conservative women combined are less than one feminist. That unfortunate conclusion is explained by the fact that the Title IX Office, like the WSRC, is run by ideologues.

Changing WSRC directors is a good start. But “The Dub” should also replace its Title IX lawyer. Fortunately, I have filed a formal complaint with the Office for Civil Rights. The matter of funding discrimination is now being investigated by the Trump Department of Education.

I simply will not tolerate feminist collusion or obstruction of justice. This investigation is far from over.