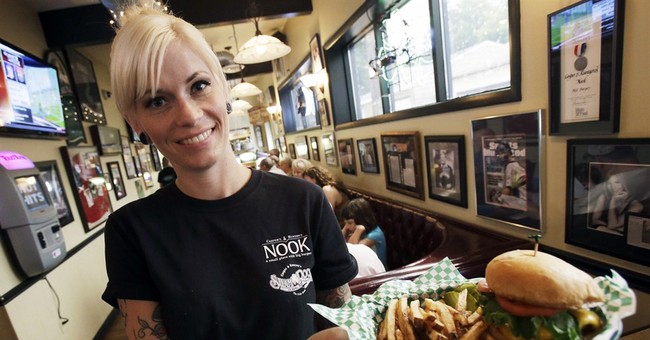 The misguided attempt to increase the minimum wage can almost be passed off as institutionalized economic illiteracy. Many people, however, have argued that it’s more than simple ignorance that drives the Left to ignore fiscal sanity and push for a $15 per hour burger-flipping wage. Well, if the latest attempt to institute mandated-minimum-pay illustrates anything, it shows that the Left isn’t that fond of the effort/reward relationship of hard work. Labor groups are now aiming to snuff out the system of tipping servers because… well… because it’s “unfair”.

There is a movement to bump the minimum wage for tipped servers (often lower than the official minimum wage, because they are primarily compensated by gratuities), which has emboldened people who seem to disdain the performance-based nature of the service industry. According to Fox News:

One advocate, Saru Jayaraman, co-director of the Restaurant Opportunities Center United, has been quoted in multiple media outlets as supporting a push to get rid of tips altogether. She was quoted in the Seattle Times describing tips as “institutionalized sexism,” and told the University of California, Berkeley’s alumni magazine that “Ultimately, this system of tipping needs to go.”

Ugh, Berkeley… Saru, of course, feels that tips are inherently unfair because America is full of a bunch of sexist cheapskates who undervalue minority workers. Or something. Although, to be fair, she does say that her comments were taken out of context. She clarified that tips would be completely eliminated only in a “utopian” world.

Right… Because who in their right mind would embrace the idea of earning more for doing a better job? I mean, isn’t it so unfair for patrons of a business to reward their waiter (or waitress) based on the service they received? (Yes… Both of those sentences were, in fact, sarcasm.) Apparently, in a “utopian” world, restaurants would compensate their servers the same way that Chicago teacher unions compensate their rank and file: Without regard to performance, or competency.

I mean, heck, tipping is the unbridled definition of “fair” in the real world… But, since when do liberals pay attention to the real world? Saru’s solution, according to the piece in Fox News, is to replace the entire tipping system with a simple “livable wage” for servers. See, this way waitresses won’t be subjected to the inherent sexism of a hungry American public. (I mean, sure: They also won’t be rewarded handsomely for doing a great job – but maybe we can just give all employees a trophy. Right?)

So now – if the labor movement gets their way and replaces tips with flat wages – the person that was making $300 in tips on a Friday night (not un-heard of in most corners of the service world), will suddenly be making a mere “livable” wage. Oh, and the employer will have to shell out more to keep this newly-impoverished member of their wait staff employed. So, yeah, hooray for liberalism: Bankrupting businesses, and impoverishing otherwise competent low-skill laborers.

And, again, what was wrong with the tipping system? Aside from its somewhat arbitrary nature (Seinfeld covered this issue pretty extensively), it appears to be fairly effective. The opportunity to make more money has proven to be a pretty motivational influence in people’s desire to work hard. In fact, unlike labor-sponsored tenure plans and scheduled pay increases, tipping provides workers with a limitless ability to improve their take-home pay through nothing other than hard work.

Oh… Wait. Now I get it. Hard work is supposed to be frowned upon by modern society. Apparently, everyone is entitled only to the wage that a bunch of academic, intellectually vacant, government bureaucrats have determined is “fair”. Because, as it turns out, preserving a relationship between reward and effort is simply unjust in a progressive utopia.

Trophies for everyone! (Just don’t tip the trophy maker.)