Fatigues Under the Mullah's Robes 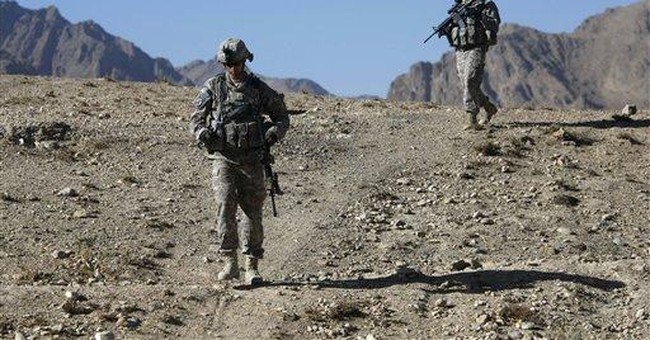 WASHINGTON -- With a decision on Afghanistan, we will now see if a reluctant president can persuade a reluctant Congress and inspire a reluctant nation to accept additional wartime sacrifice. But the administration must feel relieved. The mere act of choosing releases accumulated tension like shooting a bow, wherever the arrow lands.

That relief, however, will be short-lived. Coinciding with the Afghan decision, Iran has entered a final stage of irrevocable choices about its nuclear program. It has backed out of a deal that would have sent most of its uranium stockpile abroad to be processed for peaceful purposes. Following a censure of Iran by the International Atomic Energy Agency (IAEA), President Mahmoud Ahmadinejad announced the construction of 10 additional nuclear enrichment sites. Iran's parliament passed a resolution urging decreased cooperation with the IAEA. Ayatollah Ahmad Khatami preached a sermon at Tehran University pledging that Iran would produce its own high-grade uranium for "medical research."

This is a regime now in total defiance of international demands, moving toward breakout nuclear weapons capability.

So, have President Obama's diplomats failed? Were their honeyed words not sweet enough? Not really, because the current crisis has little to do with their skill, or lack of it. It is being caused by internal dynamics in Iran that seem immune to the rational offers and counteroffers of diplomacy.

In Iran, we are seeing the consolidation of a military dictatorship. Since the Iranian revolution of 1979, the nation's clerical leaders have had a military arm -- the Revolutionary Guard Corps -- that has acted as their ideological enforcers. It polices Tehran, organizes paramilitary forces, effectively runs Iranian elections, dominates large sectors of the economy, operates missile systems, directs Iran's international support for terrorism, controls Iran's chemical and biological weapons and would be in charge of an Iranian nuclear bomb. Ahmadinejad and many other leaders are former guard officers.

But in reaction to mass protests following June's fraudulent election, the guard's control has expanded comprehensively. Supreme Leader Ayatollah Ali Khamenei recently reorganized Iran's intelligence services to give the guard the lead role -- clearly fearful that the regular intelligence agencies were unreliable. The guard has assumed greater power over Iranian media. It is increasing Internet censorship and placing militia instructors in elementary schools. Experts on Iran now debate whether the guard is fully under Khamenei's control, or may be beyond all control.

Iran's theocracy has become a military junta with a veneer of religion. There are fatigues beneath the robes. On the nuclear issue, the main question is: Does this regime believe that nuclear weapons will help ensure its survival? There is every reason to believe that it does. As the disorders since June revealed the regime's vulnerability, it has sped up its nuclear program. Drained of legitimacy and fearing a color revolution, Iran's military government seems to believe that the bomb will confer influence and permanence. It is not an irrational calculation.

In this light, Obama's policy of setting deadlines for cooperation that are violated with impunity, and continually extending the hand of engagement after it is slapped again and again, is both weak and irrelevant. But the alternatives are not easy or obvious. The crippling economic isolation of Iran is worth trying, again. But it would require a number of unreliable nations to sacrifice large economic interests in Iran -- something they have been unwilling to do before. Direct military options are uncertain and opposed by the military itself. It is difficult to imagine Obama, the Great Deliberator, taking actions that George W. Bush concluded were too risky.

But the security implications of a nuclear Iran could be greater than failure in Afghanistan. Iran is an unstable revolutionary power with global ambitions and terrorist ties. Nuclear proliferation does not get more dangerous than this.

There is, however, an untried option. So far, President Obama has seemed to view Iran's ongoing democratic uprising as a pesky obstacle to engagement. The administration has reduced funding for human rights programs in Iran and looked the other way as exiled opponents of the Iranian regime have been attacked within Iraq.

In addition to serious economic and military pressure, Obama could try the strategy the Iranian regime most fears: supporting, overtly and covertly, the democratic resistance against military rule. Not out of idealism, but realism. It would be a source of leverage on the Iranian regime, at a time when American leverage is limited. And it might hasten the return of civilian control in Iran itself, so that America would actually have a negotiating partner.