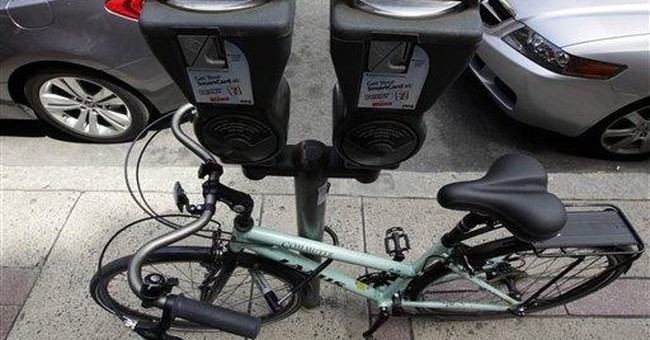 Just when you thought environmental extremists couldn’t go any further, they surprise you with yet another ploy in their never-ending quest to turn back modernity. With the public push-back on the cap-and-trade scheme and creating man-made droughts to save a 2-inch fish, environmentalists have become craftier in their efforts. Always the vanguard of the latest environmental regulation, California has a new idea for getting polluters out of their cars: get rid of free parking.

Last week the State Senate passed Senate Bill 518, legislation that would incentivize local governments to begin abolishing free parking spaces within their jurisdictions. The goal of the legislation is to make it so difficult for drivers to find parking that they abandon their vehicles in favor of earth-friendly public transportation or more quaint forms of conveyance such as biking or walking. According to the author of Senate Bill 518, “‘free’ parking has significant social, economic, and environmental costs.”

A popular tactic of progressives is to make a cultural habit they despise so unpopular that the public will willingly go along with their schemes. Another tactic is to withhold or dole out funding for local governments in exchange for conformity to new regulations. Senate Bill 518 attempts to employ both tactics.

First, the bill would require building leases to itemize how much parking spaces will cost on the leased property. This “unbundling” is designed to show the lessee how much money they lose on providing free parking.

Second, the bill creates a new point scheme for local government to encourage their cooperation in getting rid of parking spaces. For every “reform” they implement, they receive a point. If 20 reforms are implemented, the city or county is eligible to receive a cap-and-trade credit under the state’s Assembly Bill 32 global warming laws. If 50 reforms are implemented, the local government will receive a 5% bonus in competitive state infrastructure programs.

No surprise, the author of this brilliant measure is Senator Alan Lowenthal (D-Long Beach), the same legislator who two years ago tried to make it easier for communists to teach in public schools. If his portfolio of legislation is any measure, Lowenthal is an ardent devotee of progressivism. In fact, Senate Bill 518 is just one of several bills Lowenthal has introduced to further regulate private transportation.

Another piece of anti-driving legislation successfully pushed by Lowenthal is Senate Bill 728. Under current state law, employers of more than 50 people must provide a parking cash-out program if they offer parking reimbursement for their employees. So if an employee decides to take public transportation instead of driving their own vehicle, they still receive the same benefit as employees who drive. The law was designed to encourage more use of public transportation.

Lowenthal and his environmental friends decided that the law is so important, it should have some teeth for enforcement. Senate Bill 728 authorizes the Air Resources Board to impose a fine of up to $500 for any employer that doesn’t comply with the parking cash-out program.

In the official legislative analysis of Senate Bill 728, the true motivation for its passage is spelled out: “there is some research to suggest that providing free parking encourages employees to drive to work alone.” Thus, employers who compensate their employees for parking are actually contributing to global warming.

The analysis goes on to say, “employees are more likely to rideshare, use transit, or carpool when they have to pay the full cost of parking spaces. Additionally, concerns were raised that employer-subsidized parking distorts the free market and encourages single-occupant auto trips, contributing to traffic congestion and air pollution.”

But if more convincing was needed as to the benefits of the cash-out parking program, the analysis offers an argument that no progressive could ignore: “Furthermore, women, minorities, and lower-income workers are less likely to drive to work alone. Parking cash-out corrects this imbalance by providing for equivalent subsidies regardless of the travel mode.” Yes, by forcing more commuters out of their cars, true gender, racial and income equality will be achieved. Thus, it is necessary to force compliance with such a noble law.

As they spend two hours in bumper-to-bumper traffic on California’s I-405, America’s busiest highway, drivers would undoubtedly be very receptive to ideas for decreasing their commute time. But which driver is willing to sacrifice his or her car and freedom to abet fascist environmentalist in their latest ruse?