The Battle for Marriage Has Just Begun 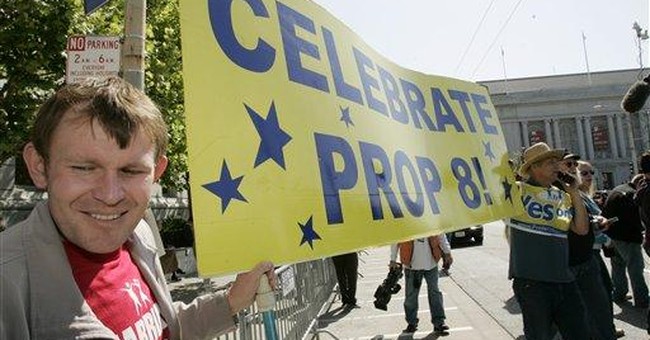 In a significant victory for traditional marriage and the democratic process, the California Supreme Court ruled 6-1 today that last year’s passage by popular vote of Proposition 8 was a proper amendment to the state’s constitution. This is a far different outcome from just a year ago, when last May the same court overturned Proposition 22, the 2000 voter-approved statute that codified the traditional definition of marriage.

Proposition 8 and Proposition 22 are identical in their language, each specifying that in California, only marriage between a man and a woman is valid or recognized. But the latter was merely a statute, which the court deemed unconstitutional for denying the “fundamental right” to marry whomever one pleases, whereas the former actually amended the constitution, thus obviating the finding of Proposition 22 unconstitutional.

According to Article 18 of the California Constitution, a revision requires the state legislature’s 2/3 approval before being placed on the ballot for voter approval. An amendment can be generated by the people via the initiative process, and while it requires more petition signatures to qualify for the ballot, it does not require the legislature’s involvement, and only needs simple majority approval by voters.

The key question before the court was what constitutes a revision rather than an amendment to the constitution. A revision is a fundamental alteration to the underlying governmental plan or framework of California. Before the initiative process was adopted in 1911, a revision to the constitution required a constitutional convention, signifying its gravity. In its decision today, the court held that Proposition 8 did not fundamentally alter the state constitution; it neither “abrogated” the right of privacy and due process nor “fundamentally altered” equal protection for same-sex couples, as argued by opponents. The amendment simply reserved the term “marriage” for opposite-sex couples, while leaving intact existing domestic partnership protections for same-sex couples.

This ruling was more than a victory for traditional marriage, it was a victory for the democratic process. The judiciary recognized the people do have the right to amend their governing documents, even when those in authority disagree with the body politic’s decisions. And based on the numerous apologies contained in the majority opinion, the justices were not eager to uphold Proposition 8. But six justices did manage to set aside their personal opinions long enough to consider the true legal matter before the court.

Another issue before the court was the existence of the estimated 18,000 same-sex couples who were legally married between June and November 2008, the brief window between Proposition 22’s invalidation and the passage of Proposition 8. In a concession to same-sex marriage advocates, the court utilized more “judicial jujitsu” to recognize those marriages. The court latched onto the fact that Proposition 8 did not contain a retroactivity provision, therefore allowing all same-sex marriages already performed to stand. The court has placed these couples in marriage limbo, victims of the court’s judicial activism and unwillingness to wait six months for the vote on Proposition 8. By recognizing these unions, the court turned a blind eye to voter intent and once again established poor legal precedent in order to justify earlier injudicious decisions.

In anticipation of their judicial defeat, opponents of Proposition 8 have prepared rallies and protests all across the Golden State. California’s largest homosexual rights advocacy group, Equality California, has already made it clear that they intend to take the same-sex marriage issue to the people until they succeed. Many same-sex marriage advocates contend that public opinion is shifting and will soon favor redefining marriage. The marriage issue may appear on the statewide ballot for the foreseeable future.

The average American has the tendency to only take political action when absolutely necessary. Moms and dad are too busy raising their children to become political activists. But as we have seen with the national Tea Party movement, citizens are awakening to realize their country’s leadership has been taken over by elitists who work tirelessly through government, politics and the education system to accomplish their goals. The judicial victory today should encourage citizens to be more involved in their government.

As Ronald Reagan warned, “Freedom is never more than one generation away from extinction. We didn’t pass it on to our children in the bloodstream. It must be fought for, protected, and handed on for them to do the same, or one day we will spend our sunset years telling our children what it was once like in the United States when men were free.” It’s time for those who cherish Judeo-Christian values, which founded and sustained our nation, to take action. While traditional marriage won this particular battle, the war over marriage will rage on for years to come.