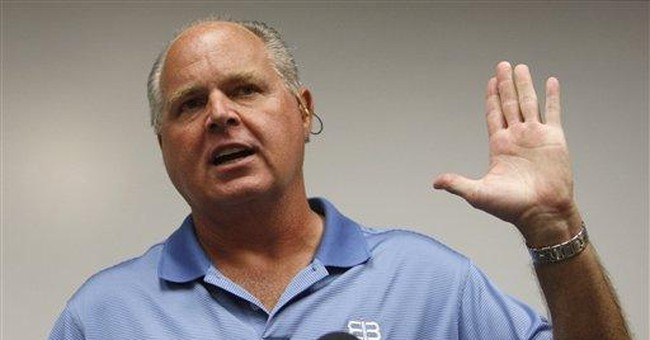 If you’ve ever tried to call into the mega-popular Rush Limbaugh Show you’ve had the pleasure of talking, however briefly, to “Bo Snerdley,” whose real name is James Golden.

In the New York Times, Zev Chafets noted that Snerdley introduced himself as an“African-American-in-good-standing-and-certified-black-enough-to-criticize-Obama guy.”

I had the pleasure of meeting Snerdley over dinner a few months ago. What is the opposite of unassuming? That’s Snerdley. He’s tall, jovial and has a booming and commanding voice – in tone and spirit. Thanks to Rush Limbaugh, I became a conservative. It was an honor to meet the man behind the man behind the golden microphone!

The Godfather – Michael confronts his double-dealing, sister-beating, jerk-off of a brother in-law Carlo. Who thinks he has successfully wooed his way into being Michael’s right-hand man – despite his role in the killing of Michael’s brother – Sonny. As he walks through the door – Carlo is on the phone perhaps womanizing. He turns. Sees Michael’s serious demeanor. And hears the words: “Carlo. You have to answer for Santino. Today – we settle all family business.” Pick your Democrat elected official. Start with Harry Reid. “Harry. You have to answer for what you’ve done to this country. Today- we settle all family business…”

Tough. My Dad first and foremost. Okay – you’re talking about school I think. School. I loved Mr. Mason (Ray Mason) my 7th grade Spanish teacher. He was “cool,” fun and showed an interest in his best students. In many ways he is my “favorite” teacher. But – I cannot forget Mr. Hyman. Richard Hyman. He was strict. He was a former US Marine. He wasn’t anybody’s “pal.” But he was a man’s man who wore a suit and white shirt and tie to school every day. And he saw something in three of his students in his 7th grade social studies class. Kevin, Kimball, and me. We had our hands up all the time for question and answer. We loved history. He singled us out. He gave us harder tests than the rest of the class. He made us write essays and graded them hard. He pushed, pushed, pushed and then pushed us more. He made me believe I was really as smart as I wanted to be and made me want to be even smarter to show him. He was right to single us out. He was the best teacher in public school I ever had. I wish every kid could have a teacher like him. I wish I could track him down if he is still living and thank him.

1) A musician, who can play at least 3-4 different instruments with the ability to “throw down” in every musical genre. Oh. He would be able to sing too- and hold a tune. 2) A master landscaper, a guy who designs showcase landscapes for everyday middle class back front yards all over America. 3) A master woodworker who designs and builds custom furniture and a myriad of other “things” that come to mind. 4) An archeologist. 4) A planetarium owner. 5) A spy.

I don’t have the foggiest notion of how to answer this one. Oh well. Elvis has left the building, apparently.

I missed most of the X-files. Netflix fixed that. I watch an episode two or three times a week. Yeah. The X-Files. Kookville.

The money (fifty bucks or something like that) that I gave my mom. It was money from my first real summer paycheck.

This is America. You can be anything you want to be. Yes. It was part of the “culture” back then.

Guests who are incapable of telling lies, trying to spin a story for political gain, journalists who know their subject matter in and out and would rather the truth be revealed than they get face time, and politicians who still believe in the goodness of America.

Too many to list. But, just today I started one more – Ideas Have Consequences, an expanded edition of Richard M. Weaver’s book published in 1948.

In the 4th or 5th grade – reading an article that ticked me off and wrote a letter to the editor of the Long Island Press. It got published. Never revealed my age – that I was just a kid, nor was it mentioned.

CBS: Sources close to WH worried about a “grift mill” during lame-duck session if Trump loses
Hotair
The Church Has Spectacularly Failed The COVID Test…and The Faithful
Redstate