Trump Can Win This Election At The Debate – And He Better

Kurt Schlichter
|
Posted: Sep 26, 2016 12:01 AM
Share   Tweet
The opinions expressed by columnists are their own and do not necessarily represent the views of Townhall.com. 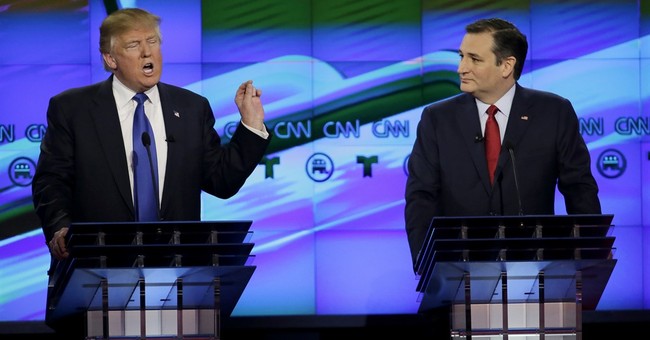 Hi Donald. I hope you’re taking this debate seriously because it’s pretty important. It’s important to you because I can’t even imagine your personal humiliation if that tired, wheezy, old half-wit the Democrats will be rolling out on stage in a Hannibal Lector dolly beats you. It’d be like losing the tango competition to Stephen Hawking on Dancing with the Stars.

And it’s important for your family. Yeah, your family. Because what do you think that evil harpy and her friends in the elite will do to your kids if you lose? You don’t think Hillary’s IRS is going to just let them be, do you? The sadly corrupted FBI? But they haven’t done anything? It’s cute how you think guilt or innocence matter under Benedict Comey. Don’t look for an immunity deal here, Donald – you think Mr. Integrity won’t keep doing what he’s ordered to do by whatever Dem is in the Oval Office? No, your kids – your family – is in danger if you blow this, because Hillary hates you just as she hates all who defy her, and persecuting, even jailing your kids, will be a wonderful way to send the message about the price of defiance.

Oh, and it’s important to the country. There’s that whole potential for this hateful, stupid woman sparking a second Democrat-caused civil war with her power-mad executive decrees outlawing our constitutional freedoms. If only someone had warned of that horrible possibility in a bestselling new novel that was available on Amazon right now…

Maybe you got into this campaign for fun, as a lark, but it’s serious now. It’s your reputation. It’s your family. It’s your country. You gotta win, and to win Monday you gotta put on the performance of your life.

So how do you win? By remembering how you got here. You’re not talking to the editorial board of the New York Times – were you as stunned as I was that they endorsed that fascist crone? No, you got there speaking for the silent majority. The ones who like cops, who don’t riot, and who only know what “EBT” stands for because some freeloader in front of them in line at Safeway paid for two crates of Pepsi with it.

You got there speaking for the deplorable people who the establishment is doing everything it can to exile from their own self-determination. You are speaking for the people Hillary and her media gestapo want to force into obedience. And all they need is one loud voice who will not be intimidated to stand up to these bastards and say “No.”

Your campaign is based on the theme that the elite deserves no extraordinary respect, while we, the People, do. Hillary’s campaign is based on the notion that us peons should all accept sweet submission to her rule. We should resign ourselves to the perpetual nagging and hectoring of the bureaucratic equivalent of an army of divorced, liberal 54-year old elementary school teachers whose lives are devoted to exercising their tiny tyrannies over their helpless charges in between posting cat gifs for their eight friends on Facebook.

This campaign is about telling these nattering know-it-alls and unloved interlopers to go to hell. “Stop telling us what to do, how to live, how to feel, and what to think. Get out of my face, jerks.”

There’s you campaign, boiled down to its essence. And it’s a really good theme too, one that frankly few of your primary opponents could have pulled off. Right now, nomine Jeb! would have been thanking Hillary and begging for another. I’m not sure which other nominee might have put the states you put into play in play. You’ve confounded the experts. Hell, you confounded me.

I doubt any would have gone for the jugular like you have. Their defeat consultants and failure coaches would have urged them to go bland, to go soft, to try and cater to the pill-addled mommies living unfulfilled lives in the suburbs who make up so much of the Hillary target demographic. You were smart – instead of them, you went for these frosty harridans’ husbands, and for the plumbers who have to take a ration of crap from these bitter shrews when they come to fix the toilet that little Kaden plugged up with his used gluten-free dinner.

I’ll be talking to non-conservative couples and the wife will sound off at length about how horrible Trump is and I’ll respond with “Yeah, well Hillary is human leprosy and I’m voting for Trump,” and the husband will totally nod and smile the second his botoxed tormentor isn’t looking. Guess how he’s voting when Cruella de Not Tonight isn’t in the voting booth with him?

And speak forcefully and clearly. Now, she’s trying to psych you out with talk of an army of consultants and shrinks working to pack her stroke-ravaged brain with one-liners and charges to unleash on stage. Typical limo lib play – go consult some hack experts. You are consulting your gut, and even if I recommended another way to prep it’s too late. So double down on the intuition that got you this far. You know people; Hillary doesn’t. Talk to them. We both know the media is much worse than anyone imagines – Hillary will absolutely have all of the questions in advance, and the “moderators” will be under orders to destroy you. Ignore them. Ignore her. Talk to us. Talk to the People.

You weren’t my first choice. You weren’t my second choice. I think you were about my 14th choice. But you and I and all of us who don’t want to spend the rest of the of the short existence of a Hillary-run United States of America with her ugly, over-priced shoes crushing our faces need to put that aside.

Stop Hillary on Monday. Be tough. Be disciplined. Be ready to ignore the shills and that loathsome felon and speak to us.

All that’s at stake is your reputation. Your family’s safety. Your country’s future.