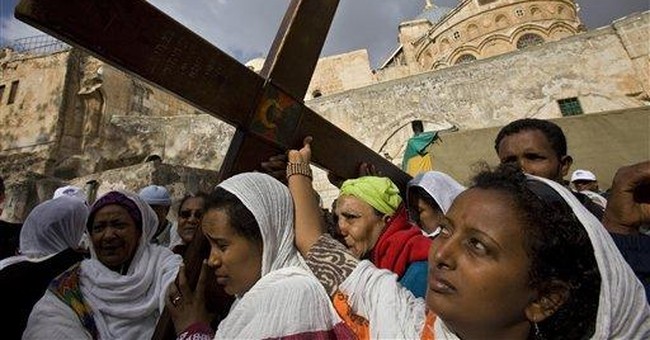 Last week, many Americans celebrated Holy Week and Passover. Both of these traditions remind us that we must continue to stand for religious freedom for all. I agree with Britain’s Anglican Bishop of Rochester, the Rt. Rev. Michael Nazir-Ali. He says that we Christians should treat our Muslim neighbors with love and with respect. We believe, even if they do not, that we are all created in the image and likeness of God. We believe that they share with us the civil rights that are enjoyed by all Americans. But we also believe, with George Washington, that each one here should be able “to sit under his own vine and fig tree and there should be none to make him afraid.”

Threats of violence should be met with the firmest measures of effective control. When Muslims threaten the murder of anyone who offends them — as they did with Christian convert Abdul Rahman in Afghanistan several years ago –we have a right to denounce such barbarism. We should stand up, and never cringe. That is a lesson from Dr. Martin Luther King I hope we all have learned.

But not everyone here agrees with an unapologetic stance for religious freedom. With the authority of one who really knows, Chris Seiple, President of the Institute for Global Engagement, took to the pages of The Christian Science Monitor last month to lecture us on the new “no-nos” of communicating with Muslims.

Speaking as one who has been to the Middle East many times, Seiple gives advice to President Obama on the words he should not use.

Don’t use jihadi, Seiple says, to describe terrorists that we are fighting. This only confirms their status as religious warriors. Seiple says they don’t merit that classification.

Don’t use freedom, either, he says. That’s because what Americans mean by freedom is often confused by Muslims as “an unbound licentiousness.” Watch out for “religious freedom,” too. Seiple thinks this term has been tainted by a too-close association with past U.S. foreign policy and the idea that we were making war to make the world safe for Protestant Evangelicals to “proselytize and convert.”

Even though he concedes that this is not an accurate portrayal of what religious freedom actually means, Seiple thinks it would be better to avoid the term entirely and speak in terms of “peace, justice, honor, mercy, and compassion.” “Tolerance” rounds out Seiple’s long list of unmentionables. Seiple concludes by saying that tolerance is not enough because it fails to build bridges of trust – “according to the inherent dignity we each have as fellow creations of God…”

What Chris Seiple is advocating, let us be clear, is dhimmitude. He is urging us to self-censor, and self-limit so that we do not offend. In short, he wants us to cringe, the better to gain “respect” in our dealings with Muslims. Dhimmi is the status accorded to non-Muslims in regions dominated by Islam. Often translated as “second-class citizen,” that unappealing phrase is itself a euphemism. We might better think of dhimmis as persons with no rights, no legal standing, no claims of citizenship, those who live shadow lives always subject to heavy taxes for simply being what they are – non-Muslims. Dhimmis may not be slaves, but they are just a notch above. Seiple is what I descriptively term a dhimmicrat. That’s not a term of abuse. It’s a word for one who uses his political or cultural position to lay on the rest of us, especially believing Christians and Jews, a de facto dhimmi status. They want us to surrender — even before the jihadists succeed in creating their umma — their all-Muslim community. Dhimmicrats are forever lecturing us on the need to be more understanding of outrageous conduct.

Newsweek magazine recently published a chilling story about young, bearded Afghan men who hang out in the slums of London. There, these often unschooled and unemployed young Muslims show each other the latest Taliban ambushes of U.S. troops in their home country — and the latest grisly beheadings of Aghans accused of spying for the U.S. and NATO forces. They are not doing this just in Kandahar or Kabul, but in London.

Britain’s Prince of Wales came to the United States recently to try to persuade us to be more understanding of Muslim demands. He does not preach understanding among the young Afghans migrants who live just a few miles from his princely palace in London. That could be dangerous. The prince may be the leading dhimmicrat in the world.

When Anglican Bishop Nazir-Ali came to the U.S. earlier this year, he did not call for persecution of Muslims. Nazir-Ali called upon all Christians to treat Muslims with genuine respect. Asked whether muezzins ought to be allowed to call Muslims to prayer in his home city of Rochester, England, “certainly,” the Bishop replied even-handedly, “as soon as church bells ring out in Mecca.” The Bishop’s point was there should be no knuckling under.

Bishop Nazir-Ali says Britain’s very life as a nation is at stake. English law and the Christian religion are what distinguished England among the nations. Both are daily being bartered away by dhimmicrats in the U.K. who fear that any resistance will bring a violent reaction.

Let’s also remember Dr. Martin Luther King, Jr., this week. He gave his life for the ideals expressed in the Declaration of Independence. Without the religious freedom afforded by this country, could his example have inspired believers around the world? He is honored by a statue in Britain’s Westminster Abbey. We should honor his memory in our hearts.