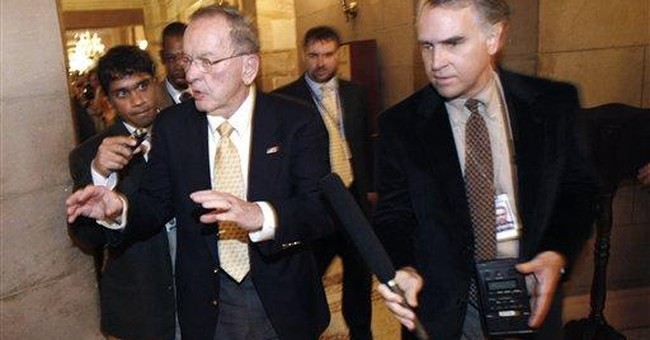 "It's that time again. Throngs of delirious Democrats are invading the streets and suites of Washington to celebrate their victories in November.

"Across town, members of that other party gather in hushed bands, mourning their loss of power, employment and staff. The more prolific have taken the op-ed pages of every newspaper as their pillories, to flog themselves for their defeat.

"As a member of that other party, enough is enough. It is time to look forward, not back."

I wrote those words for a column in February 1993. Back then, the future of the GOP could not have looked dimmer. The party needed to refocus and recharge. The following year Republicans took control of both chambers of Congress and state legislatures across the country.

Now, after two disastrous election cycles, it is clear the Republican Party must refocus again. A reenergized GOP must make Republican principles appealing both to its base and also to the changing face of America. If the party of Abraham Lincoln, Teddy Roosevelt and Ronald Reagan wants to return to power, it must become the party of the 21st century.

Right now, like then, we are conducting a detailed post-mortem to figure out what went wrong.

Some are blaming the party for moving too far to the right, losing moderate and independent voters to the Democrats. These people say social issues such as gay marriage and abortion should be replaced by economic issues. Others say the party has moved too far to the middle, demobilizing core supporters. These people cite the No Child Left Behind Act, agriculture subsidies, and now the $700 billion mega-bailout as examples of big-government policies.

Still others say that nothing is wrong with the party, and all the blame lies with John McCain and his campaign. They cite a lack of organization, a coherent theme, consistent strategy, and various missteps as leading to the GOP defeat.

Finally, some say that it's the president's fault, and the Republican Party simply could not win in this environment. They cite President Bush's low approval ratings, the percentage of voters who think the country is on the wrong track, and the declining economy as creating a no-win situation.

America is a center-right country, both economically and socially. The majority of Americans support domestic energy development, low taxes, and allowing people choice in their retirement planning and their children's education. The majority of Americans also support marriage between a man and woman, restrictions on abortion, protecting common religious expressions such as "one nation under God," and Second Amendment freedoms.

On these and many other issues, the Republican Party embraces what the majority of Americans believe, and the Democratic Party opposes those same positions. These policies naturally flow from the basic Republican principles of limited government, economic opportunity and personal responsibility. Such policies represent the three legs of the Reagan Coalition: economic conservatives, social conservatives, and national-security conservatives.

Unfortunately, Republicans have not been true to Republican principles. Federal spending has been at utterly disgraceful levels for years. The past eight years have seen a massive expanse of federal power into areas formerly left to the states or to individuals. The plain truth is that some of the things that President Bush and the Republican majority did gave conservatives a bad name, and so the GOP lost the voters' trust.

These repeated and constant failures sapped the energy out of the GOP base. It led to some voters staying home or not contributing their time and money. Some even jumped ship in protest.

Republicans have failed to communicate new and innovative ideas to persuade new voting blocs that GOP principles are something they should support. Hispanics, working women and Reagan Democrats can all be persuaded to vote for the GOP. Republicans must have solutions that reach these voters where they are. And there are solutions that represent Republican principles that can win their support.

Michelangelo is said to have denied he was a great sculptor. He said the beauty of his work was already in the rock, and all he did was find the masterpiece within it. It is time for emerging Republican leaders to become the Michelangelos who again unleash the beauty and power within the rock of GOP beliefs. Republicans must excite, energize and mobilize their base, while reuniting old coalitions and forming new ones. They must provide bold and innovative leadership to recapture that sense of optimism and opportunity.

In 1994, the party refocused and found its way back. It will do so again.