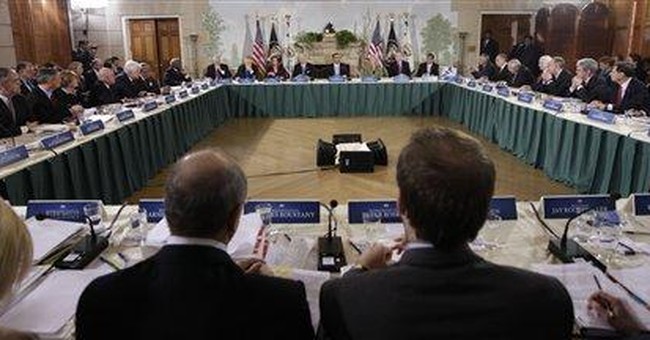 Make no mistake: If President Barack Obama actually wanted to be the post-partisan agent of Washington change, his health-care summit would have looked a whole lot different than the meeting he recently held across the street from the White House. Every Republican, from House Minority Leader John Boehner to maverick John McCain (the latter facing primary challenger from the right, by the way) walked into the meeting imploring the White House to start over, to begin again, to hit the reset button. If the president wanted to work with them in any way, he would have done just that.

Instead the president continues to argue -- aided by media folks from near everyone on MSNBC to even Bill O'Reilly on the supposedly all-right Fox News Channel -- that the American people just don't understand what his health-care plan is all about. In one sense, I agree with him. Given the fact that even the Congressional Budget Office said it didn't have enough details to do a proper examination of the latest version of the legislation in time for the official summit, the man has a point. But it's not voters' slowness that's the problem; it's the White House with the issues.

If the president were serious about being a different kind of leader, he would have invited governors at the White House summit on health care, as Republican politicians requested.

As Paul Ryan, a congressman from Wisconsin, whose attention to detail is such that even the president has trouble dismissing him, explained, "We don't really believe the government should be in control of all this." Pointing to what he and others have been hearing from Americans -- in town halls since the summer and perhaps most recently in the Massachusetts special election, Ryan said to the president: "I would respectfully submit: You're not listening to them."

Not listening isn't exactly the "hope and change" people signed up for. The president of the United States is a liberal ideologue who isn't comfortable telling you the straight facts. And he ridicules those who try to highlight the truth. Without a penchant for honesty -- or even a slight openness to it -- it's just about all he's left with.

On perhaps no issue is this more obvious than abortion. And it's been so with President Obama since before he was inaugurated. During the campaign, he falsified his position and called those who talked about his record in the Illinois statehouse liars. He continues to do just that. Late last year, he audaciously accused the Catholic bishops of the United States and others who criticized various versions of the health-care legislation for providing federal dollars for abortions of "bearing false witness" on the issue. And, after refusing to invite pro-life Rep. Bart Stupak, a Democrat, to the summit, when Rep. Boehner brought the issue of abortion up, the president of the United States simply ignored the minority leader. He apparently didn't believe that an issue that threatens the consciences of millions of Americans deserved a simple explanation from the White House.

A Quinnipiac poll last year found that 72 percent of voters oppose federal funding of abortion. A recent CBS poll found that half those surveyed didn't approve of the president's job on health care.

There's something to what Rep. Ryan said. And President Obama knows it or he wouldn't be trying so hard to gloss over what he's doing, and to dismiss criticisms. His options right now are to force some plan through Congress or walk away, blaming the "party of no" for killing his health-care hopes. But his own health-care summit is already on YouTube and provides ample fodder to counter his party's obstructionist Republicans. His opposition proved themselves anything but the troglodytes "Hardball" would have them portrayed as.

And if the president does manage to get enough Democrats to go along with his politically suicidal gambit, good luck explaining why the impractical plan is not the panacea it was supposed to be. And then the American people will understand things all too well.