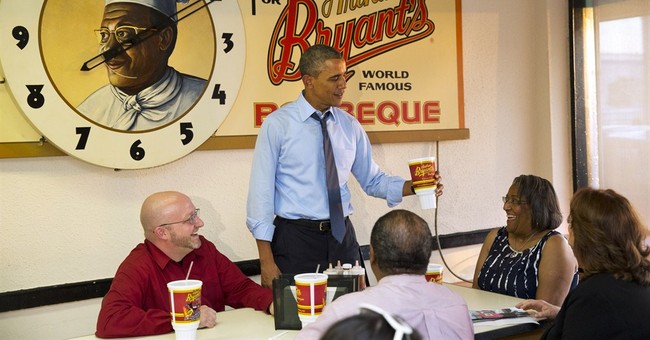 Six years into the worst administration for African Americans since Andrew Johnson sanctioned segregation in the South, it’s no surprise that riots have broken out in St. Louis.

“The police shooting of an unarmed teenager in a St. Louis suburb over the weekend triggered angry demonstrations Sunday morning and vandalism and looting Sunday night, local media reported,” says the LA Times.

The only question is: “What took it so long?”

With president Barack Obama, Attorney General Eric Holder, race-baiters Al Sharpton, Sheila Jackson Lee, and an assortment of others constantly fanning the flames of hatred-- and thus keeping the black community in the big state straightjacket-- it’s not surprising that the disenfranchised have now turned to the remedies available to the disenfranchised for eons: chaos, rioting and looting.

Self immolation is the last resort of those who have no other voice.

I’m going to be straight with you: If I were a black male in America I’d be a radical, I’d be angry, I’d be striking back.

Just not over this shooting only-- and not in this way.

Can you imagine any other population-- say Italians-- being OK with the same type of tragedy in their own communities that is decimating the black males?

While the details of the shooting aren’t clear, what is clear is that a black youth is dead, another casualty to America’s insistence by people of all colors to use, exploit, and otherwise misunderstand race relations in this country.

While not getting into the argument about why this is true, it’s a fact that by every appreciable measure this country has failed and continues to willfully fail black males. And in my long-standing refrain, as conservative, I’m not OK with it.

And if you’re conservative who is OK with it, I don’t mind telling you that I’m not OK with you. We’re better than this, not just as conservatives, but as the People of Lincoln, as Americans.

In education, in life expectancy, in income, in employment, in health and in incarceration rates, the data tell a sad story of a whole segment of society—that is, the black male—that has been left behind.

And if you don’t acknowledge the fact that behind all the reform minded talk about education, income, employment, health and crime in America lies the haunted and hunted figure of the black male—especially the young black male—then you’re either stupid, or worse yet, you’re a progressive.

If you take the black male out of the statistics in healthcare, employment, income, education and incarceration rates, the picture of America doesn’t look quite as bleak.

Take healthcare, for example. One of the principle arguments that Dems have made as to the necessity of healthcare reform has been that mortality rates in the United States are worse than in Europe, even though we spend more money on healthcare. Yet, when one looks at life expectancies in the US of populations besides the black males, life expectancy doesn’t look that much different than in Europe.

The same thing apples in education. If we take the black male out of the stats, the story is much different—and thus more damning of our policies—than if we include the black.

So what are we talking about here?

We’re talking about how America has failed black males in this country.

And while Obama and Holder certainly share a lion’s share of blame for the plight of black males in 2014, I know that conservatives can do better.

That we don’t do better as conservatives, I’m not OK with that.

We’re smarter and our ideas are better.

The fault then only lies within ourselves.