John Heubusch
|
Posted: Nov 21, 2020 12:01 AM
Share   Tweet
The opinions expressed by columnists are their own and do not necessarily represent the views of Townhall.com. 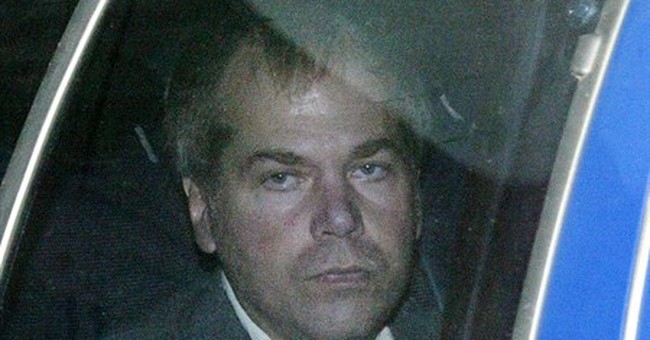 It’s understandable if the American public has forgotten that a man who nearly assassinated a U.S. president walks freely among them; after all, it seems too unbelievable to be true. But John Hinckley Jr. — the man who put a bullet within an inch of President Ronald Reagan’s heart, who severely wounded and cut short the life of James Brady and who shot Secret Service agent Tim McCarthy and police officer Thomas Delahanty in March of 1981 — has more freedom than many men who have merely plotted such evil. Beginning with the mind-boggling verdict he received (not guilty by reason of insanity) in 1982, he has reappeared in the public eye once every few years as he requests, and usually receives, a lessening of the restrictions society has placed upon him.

Every new piece of this sad, decades-long saga brings pain to the friends and family of Hinckley's victims, and the latest episode is no different.  Last Wednesday, the judge who has been managing Hinckley’s case for several years ruled that the would-be assassin can display and sell his writing, musical creations and artwork under his own name. Yet another wrong decision to add to the miserable pile.

Recall that a severe narcissistic personality disorder was said to be a major piece of Hinckley’s guilt-absolving mental illness. His desire to woo a famous actress, to make the headlines and to make the name “John Hinckley, Jr.” leap from the pages of history led him to the sidewalk outside of the Washington Hilton Hotel. Now, we’re told by his psychiatrists and therapists, indulging his narcissism further by allowing him to hawk his wares under his own name will allow his condition to improve, as if we’re dealing with a scorned child.

Hinckley is a notorious nobody apart from his heinous actions. His hitherto anonymous artistic creations have never attracted attention for an obvious reason: they are unremarkable. I shudder to think of the dark and indecent attention he may receive now thanks to the lenience of a federal judge and those who will no doubt enrich Hinkley as they traffic in the macabre. At President Reagan’s foundation, we have had to intervene before when a vial of his blood stolen from George Washington University Hospital following his attempted assassination was fetching over $30,000 in an online auction. The sale of “works of art” for profit by his would-be assassin would be no less gruesome.

By the way, many states have passed laws prohibiting notorious criminals from profiting from the sale of their stories. No such reasonable measure appears to apply here, strangely. It’s unclear too, whether Hinckley will be remitting any of his ill-gotten gains back to the victims and their families, in accordance with a 1995 settlement. I’m not holding my breath.

Hinckley’s case, as Patti Davis, daughter of the Reagans, has pointed out, has featured one giant contradiction. During the trial, Hinckley’s lawyers tirelessly worked to demonstrate that their client could hardly distinguish between right and wrong — that he should therefore be declared not guilty. With that first goal being accomplished, their tune quickly changed. Suddenly Hinkley was a reformed man, complete in his contrition and behavioral turnaround. He was soon no threat at all to society and deserved to walk freely among us.

The implicit agreement between society and criminals allowed to walk free for medical reasons is that the criminals will live quiet lives in medicated anonymity. With Hinckley’s court-enforced anonymity tossed out the window, one wonders if his medication and therapy are next. I know the families of those injured or maimed for life certainly don’t believe that Hinckley deserves to be roaming free, or more importantly, that he poses no threat to society. For the sake of the American public, I hope I’m wrong.