Jeff Crouere
|
Posted: Dec 24, 2016 12:01 AM
Share   Tweet
The opinions expressed by columnists are their own and do not necessarily represent the views of Townhall.com. 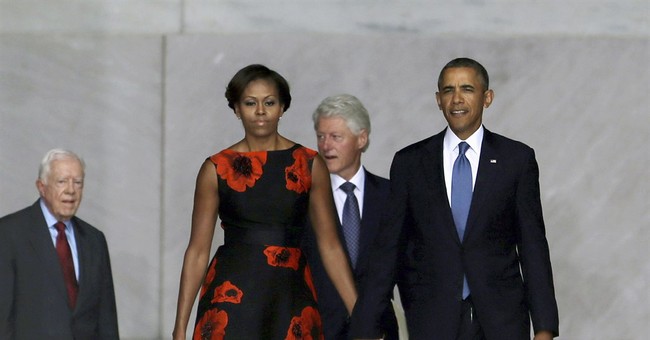 Former President Bill Clinton, is feeling pretty upset these days. Obviously, he hoped to get back to the White House as Hillary’s “First Dude.” What a spectacle it would have been for Bill to be unleashed on another set of White House interns, but this time unsupervised and unencumbered of any real responsibilities. During the presidency, he caused enough trouble with his shenanigans, culminating in his impeachment. This all occurred when he had a country to run, but as “First Dude,” he would have been free to cause total havoc and embarrassment for his wife and the country.

Thank God, the country has been spared the disaster of Hillary’s liberal policies and Bill’s liberal morality in the White House. Unfortunately, Bill is very bitter about his wife’s loss and complained in an impromptu interview at a bookstore in Pleasantville, New York that “James Comey cost her the election.” Clinton maintained that his wife had a seven-point lead in the polls that evaporated when Comey made the announcement that the email probe would be reopened. Of course, he did not mention that Comey helped his wife tremendously by refusing to recommend an indictment of Clinton despite her “extremely careless” handling of a personal email system that contained classified and top secret communications.

In his bookstore remarks with customers, Clinton also excoriated Donald Trump and claimed that he “doesn’t know much,” except how to “get angry, white men to vote for him.” This charge is almost identical to what members of the media have been saying about Trump from the beginning of his campaign. He has been underestimated and ridiculed countless times from smug liberals who were certain that he would fail. Instead, the political novice beat 16 GOP veterans to win the Republican presidential nomination and then defeated an extremely experienced opponent to win the presidency.

Regarding the familiar refrain that Trump only won because of his appeal to racial anger, it overlooks the serious and real challenges that all voters face in many Rust Belt states. Trump addressed those concerns in a better way than Clinton. Voters in Michigan, Ohio, Pennsylvania and Wisconsin did not vote for Trump because he made a racial appeal, it was clearly an economic appeal that turned the tide in his favor. His trade and immigration policies resonated with these voters, while Hillary just offered more of the same type of stagnation that had caused them such distress for many years.

Americans in the economically depressed areas of the country are right to be angry at the direction of this nation. Obviously, they voted not due to race, but because Trump was the only candidate to offer real change. In addition, the Trump coalition did not only include “angry white men,” but, also a greater percentage of Hispanic and African Americans supporters than previous GOP presidential candidates, such as Mitt Romney or Senator John McCain (R-AZ), received.

The charge that Trump is a racist who primarily appeals to “angry white men” is both offensive and inaccurate. Throughout the campaign, his spokesperson was Katrina Pierson, an African American woman. He utilized many African American surrogates in the media, including Dr. Ben Carson, who was just appointed the Secretary of Housing and Urban Development, an odd selection if Trump were truly a racist.

In typical Trump fashion, he responded to Clinton’s comments in a tweet. He posted that Clinton “doesn’t know much…especially how to get people, even with an unlimited budget, out to vote in vital swing states (and more). They focused on wrong states.”

Hillary never visited Wisconsin after the national conventions and spent little on media and canvassing efforts in Michigan and other battleground states. In the final analysis, she was clearly out worked by Trump. According to NBC News, in the last 100 days of the campaign, Trump made 133 visits to the six key battleground states of Florida, North Carolina, Michigan, Pennsylvania, Wisconsin and Ohio, whereas Clinton only visited them 87 times.

Trump’s message and his personal visits to battleground states helped his campaign achieve victory and defeat a formidable Clinton machine. Clearly, Bill Clinton “doesn’t know much” if he can’t grasp this fact. Sadly, it seems he is just an angry white man who can’t accept the election results, just like those fools protesting in the streets and on social media.

Maybe Bill Clinton can do all us a favor and join countless leftist Hollywood celebrities and leave the country. Now that would really help “Make America Great Again!”