Dawning of the Age of Obama 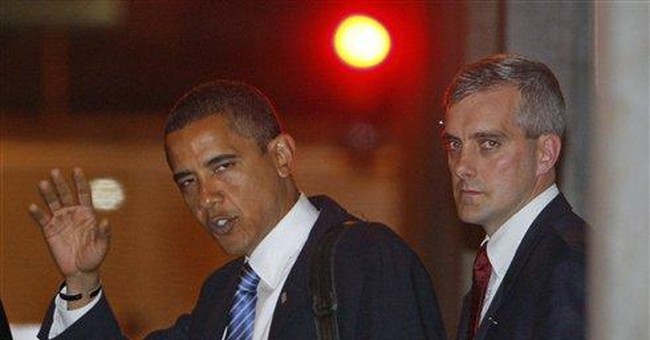 WASHINGTON -- The Capitol Steps, an ensemble that entertains Washington with political satire that often is indistinguishable from the news, begins its current show with a public address announcement advising the audience to note where the auditorium's exits are. But "in the event of an emergency, please remain seated and wait for a federal 'bailout.'" Thus does a conservative era end, with a Republican administration's policy as a punch line.

Ironies abound. The election of an African-American discomfits the Democratic Party. It practices identity politics, stressing the relevance of "race-conscious" policies, defending racial preferences in public hiring, contracting and education. But the election of Barack Obama is an American majority's self-emancipation: We are free at last from the inexpressible tedium of the preoccupation with skin pigmentation.

Another paradox: More than any presidency since Lincoln's, Bush's has been defined by a single subject, a war. But since the middle of September, in this presidency's last 130 days, the financial crisis eclipsed Iraq. Obama opposed the surge in Iraq, the success of which was perhaps a necessary prerequisite for his election. It removed the danger that he could be cast as advocating, or at least resigned to and complacent about, military defeat, from which most Americans, however much they regret the war, flinch.

More irony: September's financial storm probably sealed Obama's victory by raising the electorate's anxieties while lowering its confidence in Obama's opponent. John McCain's responses -- suspending, sort of, his campaign; ratcheting up his rhetoric about Wall Street "greed and corruption" -- suggested a line spoken solemnly by the Capitol Steps' George W. Bush impersonator: "Uncertain times call for uncertain leadership." But the storm's aftermath -- $1 trillion or so of government resources siphoned away -- will severely constrain Obama's presidency. So, this year the conditions conducive to the election of liberals, with their baroque plans and rococo dreams, have put a polar frost on most such ambitions.

Indeed, Obama's first problem will be drawing lines to circumscribe bailout promiscuity. The Bush administration, having executed a swan dive, or perhaps a belly-flop, into the financial sector, now seems to be flinching from extending the interventions into the industrial sector. Democrats in Congress, feeling their oats and hearing clamors from local corporations, will be Obama's first affliction.

Some of the Republicans' afflictions are self-inflicted. Some conservatives who are gluttons for punishment are getting a head start on ensuring a 2012 drubbing by prescribing peculiar medication for a misdiagnosed illness. They are monomaniacal about media bias, which is real but rarely decisive, and unhinged by their anger about the loathing of Sarah Palin by similarly deranged liberals. These conservatives, confusing pugnacity with a political philosophy, are hot to anoint Palin, an emblem of rural and small-town sensibilities, as the party's presumptive 2012 nominee.

These conservatives preen as especially respectful of regular -- or as Palin says, "real" -- Americans, whose tribune Palin purports to be. But note the argument that the manipulation of Americans by "the mainstream media" explains the fact that the more Palin campaigned, the less Americans thought of her qualifications. This argument portrays Americans as a bovine herd -- or as inert clay in the hands of wily media, which only Palin's conservative celebrators can decipher and resist.

These conservatives, smitten by a vice presidential choice based on chromosomes, seem eager to compete on the Democrats' terrain of identity politics, entering the "diversity" sweepstakes they have hitherto rightly deplored. We have seen this movie before. Immediately after the 1972 election, some conservatives laid down the law -- the 1976 Republican nominee must be Vice President Spiro Agnew.

For now, the president-elect is coming to terms with something noted by Ambrose Bierce, the 19th-century American wit who wrote "The Devil's Dictionary." He defined "president" as the leading figure in a small group of persons of whom it is positively known that immense numbers of their countrymen did not want them to be president. Tuesday night, Obama, in his agreeably subdued speech in Grant Park, seemed to feel the weight of that.

He especially seemed determined to assuage the unease of those, and they are many, who discern in his cool demeanor an unattractive detachment from the warm, unembarrassed, demonstrative patriotism that is distinctively American. Hence such Grant Park language as: "Even as we stand here tonight, we know there are brave Americans waking up in the deserts of Iraq and the mountains of Afghanistan to risk their lives for us." That was a prospective commander in chief finding his voice.