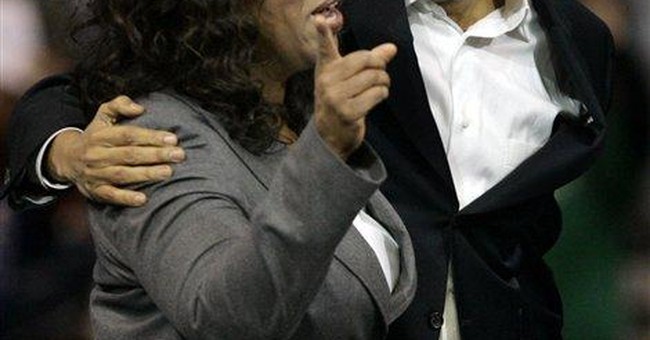 Frank Pastore from KKLA in Los Angeles interviews Richard Abanes, author of “A New Earth, an Old Deception: Awakening to the Dangers of Eckhart Tolle’s #1 Bestseller.” Eckhart Tolle is the spiritual mentor of Oprah Winfrey. Tolle and Winfrey have collaborated for an online class on Tolle’s book “A New Earth.”

“God, in the essence of all consciousness, isn’t something to believe. God is. And God is a feeling experience, not a believing experience.”—Oprah Winfrey

Pastore: [When you hear Oprah say,] “You know it’s not about belief and doctrine,” and, “God’s a jealous God” and, “I couldn’t find a seat, so I left,” what’s going on Richard?

Abanes: Well, you know Oprah talks a lot about how she is a Christian and how she believes Christianity and all of these teachings from Eckhart Tolle are compatible with Christianity. Just by those few quotes that you had right there we can see that actually this guy is teaching things that are diametrically opposed to some of the foundational teachings of the Christian faith, such as on Jesus Christ, who God is, who we are, the nature of sin and forgiveness, issues of the cross what Jesus’ mission was. So, for whatever reason, she likes saying she is a Christian, she simply—and if I can be blunt—she isn’t. She isn’t a Christian anymore than she is a Buddhist or a Hindu or a Muslim because those words mean something when it comes to various beliefs.

Abanes: His bottom line is, what’s made him so popular [is the idea that] you can escape suffering: You can have a happy life, fulfilling, peaceful, joyful, find purpose in your life if you understand who you are…. He is basically teaching Hinduism—this pantheistic view that everything we see is just an illusion and the only reality is the underlying essence of the universal life force in the cosmos and that is what everything is. And we are part of that. We are the essence of God, and that is how he defines God.

Pastore: How should a Christian respond to all of that? It sounds like it is all the New Age movement in a different suit.

Abanes: It is. It is a New Age movement, a classic New Age doctrine repackaged in this sort of feel good, practical living skills sort of package that he is giving to people. And Christians need to understand that he is not saying anything new and that is what the old deception is. They have to understand that when we confront people and talk to them, if we are talking to Christians we need to let him know about all the Christian doctrines that he actually denies. And if we are talking to unbelievers we need to let him know of some of the things that Tolle teaches that are pretty strange.

Pastore: When I hear him talking about the law of attraction and reincarnation I’m thinking, “Wait a minute so who’s running the law of attraction? Who set it up in the very beginning? Who’s running the process of reincarnation? Who decides the distinction between good and bad karma?” I mean is it an infinite regress? There is no beginning to time, matter and space? Or is it some kind of panel, or what? And he never engages these ultimate issues.

Abanes: No, absolutely not. And that is one of the things about New Agers—and especially Tolle—that they speak in terms that are contradictory. For example, he basically says there is no God out there, no personal entity to whom we can pray, who can lead us and guide us, there is just this impersonal life force essence that is god. Yet, he will at some times switch from talking about an impersonal god to talking about a personal entity that he prays to and asks for direction. So, many of these people want to have a personal God but not the accountability that goes along with it.

Pastore: I think a lot of people in a common sense way realize you can’t pray to electricity, you can’t pray to gravity, or a tree, or a rock. And so if it is impersonal, I mean I’ve got the question: How does something impersonal create the personal?

Abanes: Well that’s a great question. The only problem is the use of that word common sense and you’re thinking about this too hard. And that’s what’s fascinating about Tolle. He always tells his followers and the people who he’s speaking to, especially Oprah, “Don’t think too much about what I’m saying. Just listen to my words and let it resonate within you. That’s the truth.”

Pastore: So you’ve written this book, “A New Earth, an Old Deception,” what is the old deception?

Abanes: Well, the old deception is the oldest deception—that we are God. Basically, go back to Genesis 3 and that was the original lie, and you see it perpetrated again and again and again in all these false religious belief systems.