Ernest Istook
|
Posted: Apr 23, 2020 12:22 PM
Share   Tweet
The opinions expressed by columnists are their own and do not necessarily represent the views of Townhall.com. 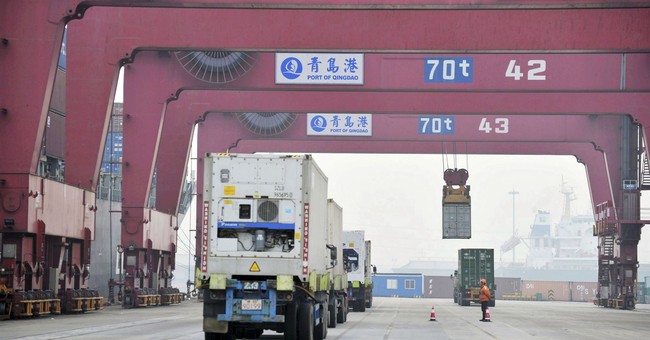 China could gain the most if the United States ended its 100-year-old Jones Act.

China aggressively aims to dominate world trade by commanding how goods are shipped around the globe as well as by making other countries dependent on its goods. Because 90 percent of world trade goes by ship, it seeks to command maritime trade by building the most ships, carrying the most cargo, and operating the most-important ports.

That intersects with the three fleets which are vital to America: Our military Navy; the international merchant fleet; and our domestic (Jones Act) ships. China is accelerating with the first two, but blocked in the third by the Jones Act, which requires purely-domestic shipping within the U.S. to be by ships that are built, owned and crewed by Americans.

China’s global shipping dominance stems from their massive system of government subsidies and state-owned enterprises mingled with the military, combined with cheap and even slave labor. It is not free enterprise and opposing it is not anti-free markets.

Their commercial shipbuilding mirrors their rapid military expansion and modernization of China’s navy. On March 18th the Congressional Research Service officially warned Congress that China’s battle force outnumbers ours by 360 ships to 297 and that:

“China’s navy is viewed as posing a major challenge to the U.S. Navy’s ability to achieve and maintain wartime control of blue-water ocean areas in the Western Pacific—the first such challenge the U.S. Navy has faced since the end of the Cold War.”

Among ocean-going commercial ships, worldwide 2,873 are under construction and China is building 1,291 of them while the U.S. is building only 8 (as tracked by the shipbroker BRS Group). The other leaders are Japan with 697 and South Korea with 475, both also heavily-subsidized, although less than China’s mega-billions. Other nations subsidize the building of commercial ships, including India and France. But the U.S. discontinued its shipbuilding subsidies decades ago.

This is why the existing international merchant fleet, according to the U.S. Bureau of Transportation Statistics, has a mere 182 American vessels of over 41,000 ocean-going cargo ships (0.4%).

But what foreign interests cannot do is engage in internal shipping moving within or between U.S. ports, nor along intracoastal waterways, the Mississippi and other rivers, nor the Great Lakes. These involve 40,000 domestic American vessels which are covered by the Jones Act.

If allowed, China and other countries could take over the construction and operation of this internal fleet, using their vast subsidies. In essence, they would be buying power over our economy.

Control of shipping is part of what China calls its “One Belt, One Road” global plan, now investing in infrastructure in 138 countries. This includes owning or controlling ports at strategic locations worldwide, buying them in what Forbes calls a Chinese “shopping spree.”

China’s holdings extend beyond its adjacent waters of the South China Sea and Indian Ocean to include ports on both ends of the Panama Canal, near the Suez Canal, elsewhere in Europe, South America, Africa, and the Middle East. This included a $1.8-billion foothold in the U.S. until the Trump Administration forced China to divest its interest in the major shipping terminal at the Port of Long Beach, California.

China’s most-recent port acquisitions have military potential as well as trade use. A partial list:

By controlling ports, controlling shipbuilding, and investing in ship operations, China seeks a chokehold on the 90% of world trade that goes by ship.

Repeal of the Jones Act would allow another foreign takeover of a vital sector of America’s economy. That would reward the anti-free enterprise maritime subsidies and would erode America’s economic power while enlarging our dependency on foreign interests.

The argument for repeal is that we could save a few bucks because China and others would offer lower shipping rates, for now at least. We’ve heard that argument before and seen it hollow-out our economy. It also weakened America’s strength in championing freedom and human rights, which China will not do. The Jones Act is about much more than money.