Will America's Ships Survive the Year of the Rat?

Ernest Istook
|
Posted: Jan 25, 2020 12:01 AM
Share   Tweet
The opinions expressed by columnists are their own and do not necessarily represent the views of Townhall.com. 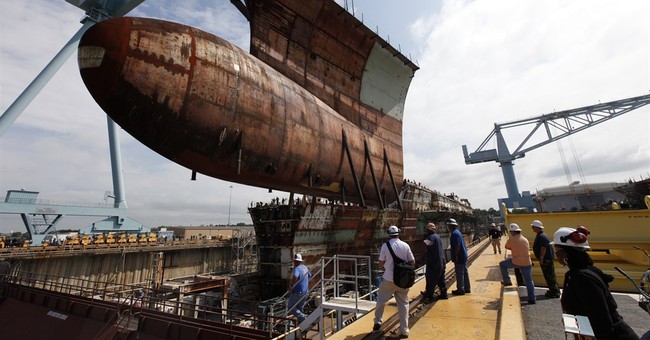 2020 is the 100th anniversary of an important U.S. law that becomes more vital each year: the Jones Act. As the United States fends off China's effort to become the world's dominant economic and military power, this law has become especially important. Yet despite the law’s significance, some Americans want to repeal it, effectively allowing China to expand their ocean dominance by moving into America's domestic waters.

Last year the world learned that China's economy has surpassed Japan's to become #2 in the world, second only to the U.S.A. A major part of China’s growth has been its heavily-subsidized industry of building and operating ocean-going ships. This is huge because 90% of all global trade goes by 41,000 container ships.

But China is shut out of America’s market because of the Jones Act (part of the Merchant Marine Act of 1920). The Jones Act, in simplest terms, requires cargo between domestic ports to be carried on vessels that are American-built, American-flagged and owned, and American-crewed. Much of the world has similar restrictions governing their internal trade, known as cabotage laws, and counterpart laws that restrict foreign air carriers and trucks from engaging in America’s domestic trade and passenger travel have been on the books for many years.

Some American interests want to end the Jones Act in 2020, which under the Chinese zodiac calendar is the year of the rat. Motivated by possible cheaper fares offered (and subsidized) by foreign nations, they want to open our domestic waterways to foreign ships, owners and crews.

Free enterprise is not at stake. At the heart of foreign shipbuilding operations are massive subsidies. Many other countries have major shipbuilding subsidies (which the U.S. does not), but none as massive as China’s.

Since China announced its Belt and Road Initiative years ago, the country has invested mega-billions not only to control global cargo ships but global transportation itself. The government’s official plan subsidizes its state companies not only to build cargo ships but also to control port facilities all over the globe. This includes facilities on both ends of the Panama Canal, in Europe, in South America, in Africa, the Middle East, the Indian Ocean and of course the South China Sea—covering the major global shipping lanes.

A Harvard study found that in 2006 China designated shipbuilding a “strategic industry” and since then, “Chinese subsidies dramatically altered the geography of production and countries’ market shares.” This aid gives them an estimated 13-20% advantage in ship construction costs, which then is boosted further by lower wages and regulations. And once built, according to United States Maritime Administration (MARAD) officials, China pays an estimated $7-million per year per ship to reduce operating costs.

Where would foreign flags be flying without the Jones Act? As explained by MARAD officials:

Domestic waterborne transportation is . . . between ports, coastlines and almost all states and territories -- including Alaska, Hawaii, and Puerto Rico. Each year, tens of thousands of vessels transport over a billion tons of cargo, with hundreds of ferry operators transporting millions of passengers, contributing billions to our nation's economy through freight and passenger revenue, taxes and private investment. . . . To ensure the survival of this key industry, Congress has passed legislation (the Jones Act) reserving this waterborne domestic trade to specific U.S. vessels.

Those clamoring to end the Jones Act ignore the national security aspects of inviting foreign powers to handle America's internal trade. A smaller U.S. maritime fleet, for example, is of less assistance to our military in times of emergency. Instead, asserting that only money is important, they promote the notion that foreign interests could handle our internal cargoes more cheaply.

That would be the ultimate example of being penny wise and pound foolish. Even the father of modern capitalism, Adam Smith, wrote in The Wealth of Nations that a country (in his case the United Kingdom) should protect its maritime trade from foreign competition.

Here's a preview of what would happen if our domestic shipping fleet began to resemble its international shipping counterpart. The Bureau of Transportation Statistics reports that now only 182 of over 41,000 ocean-going cargo ships are American (0.4%). The vast majority are built in the subsidized shipyards of China, South Korea and Japan. Currently under construction worldwide are another 2,995 ships (as tracked by the shipbrokers BRS Group). Only 8 of those commercial ships are under construction in America.

The Jones Act is not just about economics, it is about the national interest and security. Repealing the law would be an American surrender to nations that want a global maritime monopoly, and would put America’s 40,000 Jones Act vessels in economic peril. This would be bad any year, but especially now during the Year of the Rat.

Former Congressman Istook held key positions in Congress over trade and transportation. He now practices law, teaches political science, and is a Distinguished Fellow with the Frontiers of Freedom Foundation.