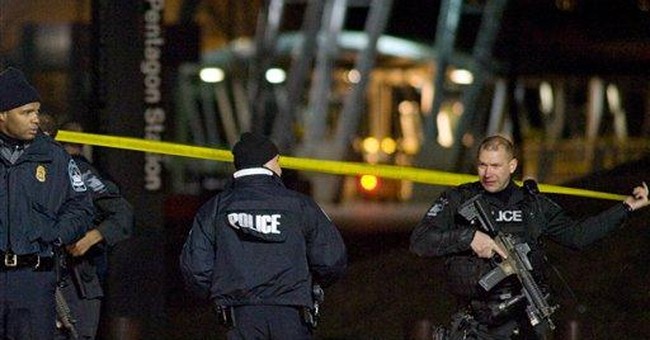 WASHINGTON -- There has been yet another eruption of violence from what our liberal friends a year or so ago were wont to call the "Angry Left." However, if you read The Washington Post, you might think this recent outburst of violence came from talk radio.

The angry leftist behind the violence was John Patrick Bedell, 36, who, on the evening of March 4, walked up to an entrance of the Pentagon; pulled a gun on two Pentagon guards, Jeffrey Amos and Marvin Carraway; and was shot dead. Both guards were wounded.

In the aftermath of this attack, it was reported that Bedell was a pot-smoking intellectualoid from California who left word on the Internet that according to his findings, a "coup regime" took over Washington at the time of President John F. Kennedy's assassination and has governed the country "up to the present day." What is more, the "coup regime," according to Bedell, was complicit in 9/11. This judgment might strike you as extreme, but apparently it is not, at least not on the left. You will recall that President Barack Obama's recently resigned environmental czar, Van Jones, signed a petition to this effect before being invited into the administration.

In the Post's report on Bedell's assault headlined "Pentagon shooter's erratic journey," a high-school classmate recalled, "I remember (Bedell) being a sweet-natured, funny peacenik." Another acquaintance reported to the Post that Bedell was a heavy marijuana user, and elsewhere one of Bedell's brothers reported that he was a perpetual student who, as far as the brother knew, never held a job while bouncing from campus to campus and developing his esoteric theories. All in all, this glassy-eyed ideologue was surely a man of the left -- the infantile left, to be sure, but the left.

Nonetheless, in the Post's companion piece analyzing Bedell's assault and appearing on Page One under the headline "The disaffected lashing out at symbols of power," Post reporters wrote of "Bedell's rampage as a distorted manifestation of the anti-Washington view that has driven the rise of right-wing militias." Yes, they said "right-wing militias." Then, just a few paragraphs away from the Post's report of Bedell's being a pothead and a "sweet-natured, funny peacenik," the Post's analytical piece gibbered on about "militias and hate groups" that "are interlinked to a much greater degree by the Web and mainstream radio and TV talk shows that echo many of the same viewpoints." So if Post readers think Rush Limbaugh had a hand in the recent assault on the Pentagon, they can be forgiven.

Now, I actually listen to talk radio from time to time, and I cannot recall ever hearing one of the conservative talk hosts "echo(ing) many of the same viewpoints" of the wretched Bedell or any other member of the Angry Left. For that matter, I cannot imagine any member of the Angry Left finding himself in accord with conservative talk radio. How does one explain the Post's analysis, which is contradicted so starkly by the Post's news report? Does anyone edit the newspaper today?

My explanation is that some journalists are actually very pious people. They have a deep faith in their heroes, and the Angry Left remains revered in these journalists' trusting minds. They see a California pothead who shares Van Jones' suspicion that the Bush administration was complicit in 9/11 attempt to gun down Pentagon guards, and they want to change the subject. They change the topic to "right-wing militias." Unsatisfied with that act of legerdemain, they bring in talk radio and TV talk shows. It all has happened before.

On Nov. 22, 1963, an American communist, Lee Harvey Oswald, who admired the Cuban Revolution, gunned down JFK in Dallas, and the same kind of pious journalists caught gibbering in the Post the other day fastened the nation's attention not on left-wing violence, but on right-wing critics of Kennedy living otherwise-peaceful lives in Dallas. The violent potential of militant leftists never was pondered, though America was about to enter into a decade of protest that witnessed leftists burning down university buildings, bombing ROTC facilities and otherwise committing acts of violence on behalf of peace and a better world.

Thus, John Patrick Bedell, a lifelong member of the Angry Left, gets himself killed while assaulting the Pentagon, and the pious journalists at The Washington Post lump the poor guy in with right-wing militias. It is shoddy journalism. Much worse, it is a shocking act of disrespect for the dead.