Give Scott Brown a Break, OK? 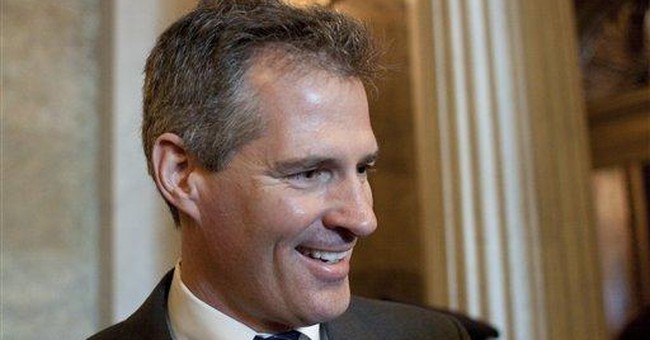 After Sen. Scott Brown, R-Mass., voted in favor of a jobs bill endorsed by President Obama and the majority of Senate Democrats, I immediately heard from a number of Republican friends in and around Washington, D.C. who knew I am a conservative from Massachusetts.

The questions were rapid fire and the anger was surprising. “How dare he side with Obama?” “Is he just a Kennedy Republican?,” and “Where do I go to get my donation back?”

My response to all was, “You have got to be kidding me. This guy has not been in office a month, he’s only taken three votes, and you’re willing and anxious to label him a traitor to the GOP because he voted in the best interests of his constituents?”

The anger, name-calling, and profanity now being directed at Brown from a minority on the right is a perfect example of why I left the Republican party a few years ago. In columns and on the air, I now refer to myself as an “independent conservative.”

In the increasingly worrisome and dangerous Post-9/11 world we all inhabit, it’s more important than ever that we have adult and independent leadership in Washington.

As one who has worked in and around national politics for the last 20 years, I have become disgusted and horrified at the sight of politicians from both sides of the aisle who purposely put self and party before the welfare of our nation.

Again, in a pre-9/11 environment, while not acceptable, such behavior was not fatal. Today, terrorists literally plan night and day to attack our nation in the most lethal way possible.

In his victory night remarks, Brown made it clear that he recognized the pending and growing threat of terrorism. While most in Washington still choose to bury their heads in the sand on the subject, Brown would be wise to seek out former senators Bob Graham and Jim Talent, who now head up the bipartisan and congressionally mandated Commission on the Prevention of Weapons of Mass Destruction Proliferation and Terrorism.

If he does, they will tell him quite candidly that they cited a recent study from the intelligence community, which projected that a one-to-two kilogram release of anthrax spores from a crop duster plane could kill over 400,000 Americans. They would further tell him that these anthrax spores are by far, the easiest WMD available to terrorists.

From all that I have seen and read about Brown, he is an honest and independent voice in Washington. A voice which needs to be welcomed for reasons of national security, independent thought, and civility. Not vilified immediately because he failed to vote in partisan lockstep with the Republican leadership.

With Brown’s somewhat surprising victory, the entrenched political machines of both the left and the right got a timely wake-up call. Not only were the voters of Massachusetts tired of the destructive politics-as-usual coming out of Washington, but the American people are beyond sick of it. So much so, that the majority of voters in our nation now rightfully label themselves independent.

For the moment, the Democrat party finds itself the target of that independent anger and worry. Soon, those same disappointed independents will turn their weary eyes toward the GOP. And when they do, they won’t like what they see. To paraphrase talk show host Glenn Beck, for the Republican Party to say “we suck less than the other guys” is not only not the answer, it’s an insult.

If independent-thinking Brown keeps voting his conscience, he, the Bay State, and our nation, will be the better for his convictions. He just needs to keep fighting that machine and its special interests.