Obama and Cuba: A Baby Step in the Right Direction 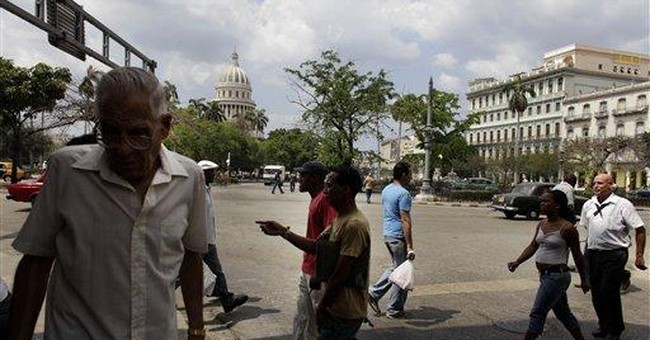 WASHINGTON -- Barack Obama's decision to allow unlimited travel by Cuban-Americans to visit family members in Cuba is a smart, long-overdue step aimed at steering that country toward democracy in the post-Castro era.

His decision to let Cuban-Americans send cash and goods to relatives in Cuba comes at a time when polls show a large majority of Americans want to end the trade and travel bans toward the Caribbean nation and re-establish diplomatic ties.

With an ailing Fidel Castro in retirement and his brother Raul tenuously in power, the time is fast approaching when it wouldn't take much to topple the Communist regime and move poverty-stricken Cubans into the arms of a capitalist economy.

Obama's policy strategists envision waves of prosperous Cuban-Americans flying into Havana for lengthy stays, bringing their cell phones, BlackBerrys, iPods, cosmetics, fashions and other material possessions, along with their stories of entrepreneurial dreams come true in the Land of Opportunity.

Those dreams still live within the hearts of the Cuban people who have been imprisoned in a society hungry for economic and political freedoms and the consumer goods that Castro's brutal dictatorship has long denied them.

Obama is eager to open up the country to trade and commercial and business relations, but wants Cuba to move toward democratic reforms first. And there are growing signs that Cuba's younger generation is ready to move in that direction.

Americans, too, seem ready to end the half-century-old split between the two countries and the embargo put into place by President Kennedy after the Bay of Pigs fiasco.

A survey of more than 1,000 Americans reported Friday that nearly three-quarters of them support re-establishing U.S. diplomatic relations with Cuba. The CNN/Opinion Research Corp. poll, conducted April 3 to April 5, showed that 71 percent of respondents favored restoring ties between our countries. Only 21 percent opposed any change toward Cuba.

When the same question was asked two years ago, 62 percent favored diplomatic relations and 29 percent opposed it.

Still, the issue of normalizing relations remains a fiercely contentious one in Florida, where much of the Cuban-American community strongly opposes ending -- or even easing -- the 1962 trade embargo. A poll by the University of Miami's Institute for Cuban and Cuban-American Studies reported last month that 57 percent of Cuban-Americans in Miami-Dade County said the embargo should remain in place or even tightened.

But a poll of Cuban-Americans last December in the same county by the Florida International University Institute found that 55 percent favored ending the trade embargo, and 65 percent supported restoring diplomatic ties.

And there is a bipartisan movement in Congress to move further and faster on Cuba than Obama is prepared to go at the present time.

No previous president since the 1960s has dared to challenge the bitter opposition within the Cuban-American community for fear of losing Florida's pivotal electoral votes. But Obama senses an emerging change of heart among Cuban-Americans toward opening up economic ties in Cuba. Starting with the power of person-to-person diplomacy.

"The U.S. relationship with Cuba is about to begin a long-overdue thaw," Latin American policy analyst Adrean Rothkopf recently wrote in the U.S. Chamber of Commerce's Web site. "With Fidel Castro on the sidelines and his elderly brother likely assuming the leadership for only a brief period, the Obama administration and members of Congress on both sides of the aisle are beginning to show signs that they are willing, gradually, to embrace changes in U.S. policy.

"And with some luck, that might one day lead to undoing a 50-year-old policy that will almost certainly be remembered as one of the least effective in American history," she said.

Obama has taken a good first step, especially in allowing U.S. satellite and cellular communication companies -- the technology of freedom -- to offer services in Cuba.

But he may be underestimating how ready the Cuban people are for even broader change. Let's open the gates wider to U.S. tourism and everything else America's free market has to offer the Cuban people.

The failed Castro regime is dying. It's time to tear down the embargo wall and proclaim that we are open for business if they are ready to open their markets, liberalize their government, and free their citizens. My guess is that the Cuban people are ready to deal.

I Know Exactly Who Is To Blame for This New Wave of COVID-19, and I Know Who Is Making a Fortune on It
Townhall
This. Guy. GETS IT. --> Hardhat intellectual RAILS on societal ignorance (sheep?) over Biden, CDC recommendations, and forced vaxxing (watch)
Twitchy
Brett Kavanaugh's Gelatinous Spine Green-Lights More Government Theft
Redstate
A Day in the Life of a Low-Information Voter
PJ Media