Dakota L. Wood
|
Posted: Dec 12, 2020 12:01 AM
Share   Tweet
The opinions expressed by columnists are their own and do not necessarily represent the views of Townhall.com. 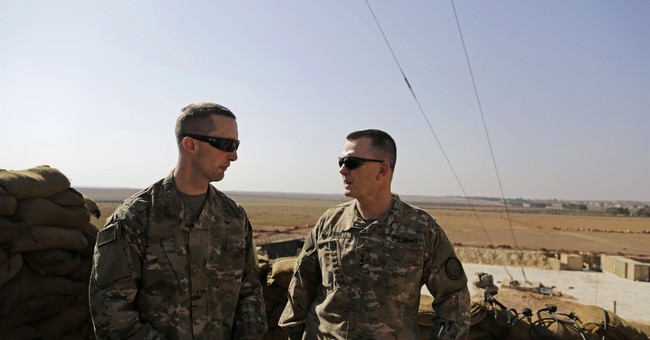 Leaving aside the debate over the causes of climate change — and the pace of that change — promoters of the argument that changes in the global climate are a “security threat” to the U.S. muddle our understanding of the term and jeopardize our ability to confront real security threats to the country.

All sorts of things vie for our attention as they affect our country’s economic, security, moral, and human interests. But lumping everything we think is important into the basket of “national security” dilutes the term, makes it harder to prioritize limited resources (money, time, attention), and distracts the U.S. military.

Directing the Department of Defense to account for the threat of climate change in all planning sets up contradictions wrapped in hypocrisy. We saw this during the Obama administration when funding for the military fell irresponsibly short of the things the military was required to do.

Our military was expected to sustain operations in Afghanistan, Iraq, and elsewhere while simultaneously being warned that they would be derelict in their duties if they did not account for the severe effects of climate change. And yet they were starved of the resources to do both.

According to the Obama administration, and presumably a Biden one too, the implications of climate change include more intense weather events that will be “more frequent and more severe...inflict more damage, heighten humanitarian needs, undermine development investments, adversely impact public health, contribute to ecological, social, and political instability, compromise diplomatic goals, and undermine national security interests.”

Setting attribution aside, this heady list of challenges would seemingly require the military to be more capable of responding to humanitarian crises and various climate-induced conflicts around the world.

Given this backdrop, it would be immoral not to increase defense spending so as to prepare the military to deal with a world riven by more — not fewer — crises. And this in addition to being prepared to prevail in war.

Yet in spite of orders to be prepared for potential conflict with major competitors and to prioritize adapting to the increased security implications of global climate change, there are increasingly strident calls from the political Left to reduce spending on defense by 10 percent or more. What? Do more with less funding and fewer resources?

At present, the U.S. military is too small, too old, and insufficiently ready to handle more than one major conflict in spite of the emphasis placed on a return to great power competition. It is facing extraordinary bills to modernize after 30 years of neglect: $80 billion to replace 50-year old Minuteman III ICBMs, another $80 billion to replace 30-year old strategic bombers, $100 billion to replace aging ballistic missile submarines, mounting costs to replace tanks, amphibious vehicles, artillery systems, and basic support equipment acquired in the 1980s and 1990s.

The U.S. Navy’s fleet of 296 ships average over 20 years old. Meanwhile China, alone, already fields 350 ships and is growing at a rate equivalent to the size of the entire navies of other countries every two years or so. Iran has assembled an arsenal of 3,000 ballistic missiles, and North Korea continues its efforts to expand its inventory of nuclear weapon delivery capabilities.

The U.S. Army and Marine Corps are both trying to solve the challenges of operating against major opponents with substantial military power rather than terrorist groups with little ability to prevent the U.S. from doing what it wants.

In addition, this says nothing about the fact that the cost of ships, tanks, and aircraft needed to survive in modern combat, much less prevail, has grown five times or more above the rate of inflation.

Simply put, the U.S. military cannot do what is being demanded of it without a corresponding increase in funding or a dramatic and dangerous reorientation from its real job: defending the country from military threats. Ordering it to defend the country and take on climate change as a national security threat without giving it the resources to do both does a disservice to the men and women who have dedicated themselves to serve the country in uniform and to the American people who expect their military to do what only it can do.

Let’s get real about “climate change” and how we view it through the lens of national security. No matter the driver, if climate change is a threat, then provide the funding needed to upgrade century-old bases, replace half-century-old aircraft, expand the force beyond the bare minimum needed to defend against a single threat, and ensure our forces can train enough to be competent in their jobs.

Anything less is hypocritical and an insult to the force we supposedly need, value, and respect.

Dakota L. Wood is a senior research fellow in The Heritage Foundation’s Center for National Defense.