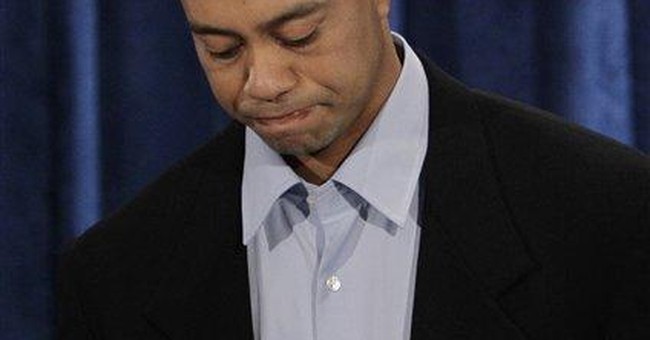 If Tiger Woods confesses to private acts after they became public -- and takes three months to do so -- should the public accept his confession and forgive him?

Some media critics think last Friday's staged event with a friendly audience that included Woods' mother, his friends and selected journalists was too perfect, too scripted and too much. Others want to wait and see if he can put his family back together and get his golf game back on track.

No one can fully know the human heart, but to be believable Woods must lead a new and consistent life in which he demonstrates he has acquired the character and integrity he confessed he failed to embrace. Woods noted that his wife, Elin, "pointed out to me, my real apology to her will not come in the form of words; it will come from my behavior over time."

Was this a public relations gimmick, or the real deal? We know of crooks that have gone straight and we admire them for it. Some have given testimonies in churches or at old Billy Graham crusades. Adulterers should have the same opportunity for redemption.

The problem in our culture is that standards have been exchanged for feelings and a nonjudgmental attitude. All choices are to be treated as equally valid so long as the person making the choice "feels good" about it. "It can't be wrong, if it feels so right," goes the song, when in fact it very often can be wrong if it "feels" right. Woods said he "felt" he was entitled to all of those women.

So, was he sincere? A better question might be: was he demonstrating remorse, or repentance? Remorse is regret for getting caught at something one should not have done. Repentance is an acknowledgement that one's behavior has offended an authority higher than one's self and a commitment to turn from that behavior with the intention of never engaging in it again.

King David understood repentance when he wrote Psalm 51. After committing adultery with Bathsheba and getting her pregnant, David ordered her husband, Uriah the Hittite, home from the battlefield, hoping he would sleep with Bathsheba so David might deny paternity. When Uriah refused for the sake of his troops, David ordered he be placed in the front lines where he was killed. Nathan the Prophet exposed David. King David repents ("against thee and thee only have I sinned" he tells God) and while God forgives him, he still takes the life of David's son born from the adulterous affair.

It is a startling account many learn in Sunday school and the lesson is that God does not regard sin lightly, as modern culture does.

"I have a lot to atone for," said Woods, which is an impossibility. One cannot atone for one's self. But there is One who can and while Woods says he wants to again claim the Buddhist faith of his youth, it isn't Buddha who does the atoning.

There once was a time when people who committed adultery and were found out went into hiding. Now they hire lawyers and agents and go on TV. The reason we see such low behavior is because we promote it and some secretly envy it.

For Woods, another song lyric offers hope: "It's not where you start, it's where you finish."