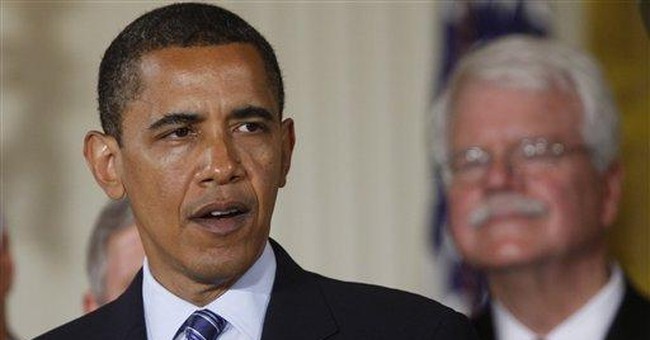 A criticism heard during the early years of the Bush administration was that the media were "in the tank" for Bush, fearing to question his foreign and domestic policies in the aftermath of 9/11 because of his then-high approval numbers and concern that they would be labeled unpatriotic.

Such fears have evaporated with the advent of the Obama administration. The intensity of media worship and slavish devotion by more journalists to President Obama and his policies has risen to what one might expect from members of a cult.

On MSNBC, Newsweek editor Evan Thomas said of the president: "...in a way, Obama's standing above the country, above -- above the world. He's sort of God." Speaking of Ronald Reagan, Thomas said he was "all about America" (and) Obama is 'we are above that now. We're not just parochial, we're not just chauvinistic, we're not just provincial.'" When was the last time you heard an American president faulted for putting America first?

This religious-like faith in Obama has led the media not to question much of what he does. He claims his stimulus plan has "saved or created" 150,000 jobs and that "stimulus II" will "save or create" 600,000 jobs this summer. How does government "save" a job and how does one measure such a claim? In January, before taking office, the president said 90 percent of the new jobs he would create would be in the private sector. The media have yet to ask him why that promise has not yet been fulfilled.

Last March, the president visited Columbus, Ohio and announced that 25 police jobs were being saved because of his stimulus bill. According to CNN, "without the money, the officers never would have hit the streets. They were to be laid off before their first day of patrol, victims of city budget cuts." The influx of federal stimulus money, however, has done little to solve the city's budget crisis. Columbus voters will decide in August whether to approve a tax increase. If they refuse, city officials may have to lay off 324 police officers. That would be a net loss of about 299 jobs. Don't look for the media to headline that outcome, should it occur, as they trumpeted the original "job-saving" announcement.

Commenting (reporting is a lost art) on Obama's D-Day speech at Normandy, Chip Reid of CBS News said Obama "hopes to create a world where there never has to be another D-Day." Who told Reid that? And why didn't Reid ask how Obama intends to bring that about and what makes such an effort different from, say, the failed League of Nations and failing United Nations?

NBC's Brian Williams recently hosted an "Inside the Obama White House" special. As the conservative Media Research Center has noted, even liberal Bill Moyers couldn't take the sugar rush: "NBC News this week delivered a candygram to the President -- two primetime specials called 'Inside the Obama White House.' President Obama couldn't have asked for a sweeter salute..." Perhaps what gave Moyers a toothache was this statement by Williams, "People react strongly to this president. We've seen people moved to tears after just the briefest encounter with him."

The danger in such hero worship is that this president (or any politician) might begin to believe his own press. A president who hears nothing but praise is likely to be less cautious and more enamored with himself. He could be tempted to think, if not actively, than passively, that he is, like Caesar, a "god," above all others in ability and accountability.

It is neither in the interest of the country, nor the president, for the public and the media to treat President Obama as a messianic deliverer.

I recently saw two bumper stickers on the same car. One said, "Obama '08" and the other "Question Authority." Surveys have shown most in the mainstream media supported Obama's election. Too many journalists have forfeited their responsibility by failing to question his authority, losing what little remains of their credibility, not to mention readers and viewers. The public is losing its right to be told the truth.

There are houses for worship. Newsrooms ought not to be one of them.