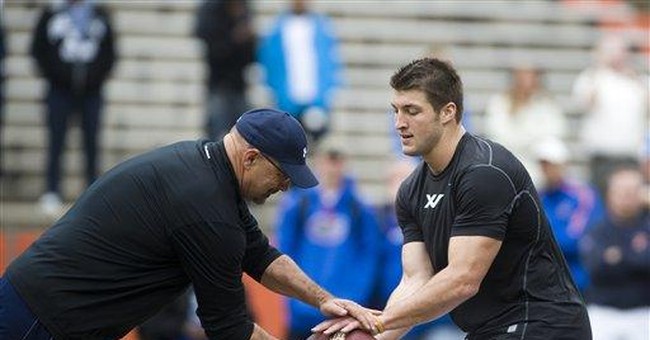 2010 may have been an encouraging year for political conservatives, but it wasn't so rosy for America's culture. The most depressing result was the Second Circuit Court of Appeals granting our television networks the right to employ the nastiest curse words in front of children at any hour of the broadcast day.

In her opinion, Judge Rosemary Pooler insisted that the TV networks weren't pushing the envelope like "a petulant teenager angling for a later curfew"; they were good people with a "a good faith desire to comply with the FCC's indecency regime." The judge should win some sort of Alice-in-Wonderland prize for declaring the absolute opposite of all the evidence right in front of her face. Here are my other choices for other cultural winners and losers this year:

Loser: Perhaps inspired by Pooler, CBS put out a sitcom with the title "(Bleep) My Dad Says." Critics were bored. Viewers flushed it.

Winner: Tim Tebow. The quarterback's heartwarming pro-life ad with his mother during the Super Bowl was so winning, and so un-political, you could see why CBS would allow it.

Losers: The radical feminists who protested this ad as a vicious sermon without seeing it. How embarrassing. Let's add Chicago-based sports marketer John Rowady, who sneered Tebow was ruining his career in Advertising Age magazine: "His promotion of his 'belief system' has built a perception throughout the league that he has a long way to mature from a business perspective, especially in the fast lane of the NFL."

Tebow wasn't harmed: He was drafted in the first round by the Denver Broncos, and at year's end, he was starting and leading the Broncos to victory.

Winner: Sandra Bullock. Defying the Hollywood odds, she won an Oscar for her heartfelt portrayal of Leigh Ann Touhy, whose Memphis family adopted a black teen named Michael Oher and loved him into college and then a starting job with the NFL's Baltimore Ravens. Critics hated the film, but America loved it. One reviewer found it "contrived, storybook-sweet, credulity-straining and -- um, true."

Loser: Fox's "Family Guy" is always looking for a new low in sick jokes. They found one when baby Stewie and his dog, Brian, were accidentally locked in a bank vault. The baby orders the dog to eat the contents of his diaper. When the dog actually eats the baby feces, the baby vomits and then says, "Got some dessert for you." The dog then eats the vomit. The dog also licked the baby's rear end clean, so Stewie could boast to the otherwise empty vault that the dog "French-kissed my bottom clean."

Earth to Judge Pooler: Networks never "push the envelope"? Millions of children are exposed to this garbage.

Loser: Garry Trudeau, who scheduled a comic strip on Christmas Day that spewed hate at God. A female soldier said her chaplain "yells at God a lot." A female social worker replied: "He deserves it. In my extremely humble opinion."

Winner: Charlie Daniels. His blazing violin graced an ad for Geico, and his new album, "Land That I Love," underlined the strong emphasis on patriotism in his music. That's a snapshot of his career, a love affair with his country that he has expressed in song, both here and everywhere our military serves, for more than a half-century.

Loser: Louis CK, promoted by Jon Stewart on "The Daily Show" as "one of my favorite comedians." As they were joking about being bleeped by censors, Louis said, "I was going to say that the Pope f---ed boys and I didn't have time." After sick laughs, he insisted he was serious: "I do think he does. Can I defend that before we go away? ... Well here's the thing. He lets other people do it," and you are either outraged, or you are participating in it. Oddly, Stewart later held a "Rally for Sanity" to condemn vicious insults.

Winner: family films. Studio heads were shocked again by surprise hits like the remake of "The Karate Kid," which grossed more than $175 million. None of the top 15 movies received an "R" rating. Six of the top 15 movies were animated, and at No. 1 in box-office receipts (with more than $415 million) was G-rated "Toy Story 3." A St. Petersburg Times critic suggested it wasn't just the best film of the summer; it could be Best Picture of 2010. Quality doesn't have to equal perversity.

Children are good at nagging and dragging their parents to the cineplex. Someone in Tinseltown should just wake up and smell the popcorn.