This Is Your Nurse On Drugs 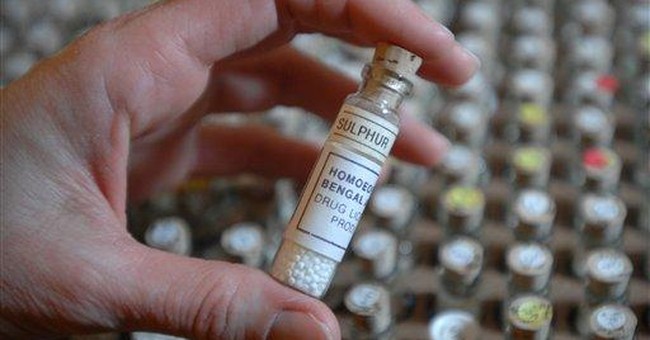 Twisted Hollywood and its twisted parade of tastemakers known as television critics are forever in search of another "black comedy," and if audiences don't embrace one, then they can always make another one. Showtime didn't succeed with "Secret Diary of a Call Girl," so now they're trying a different brand of prostitute. "Nurse Jackie" is an addict who has daily sex at noon with her hospital pharmacist in exchange for Oxycontin and other drugs. She's married and a mother of two little girls. She is a filthy degenerate.

And the critics love it. Matt Roush of TV Guide calls it "a perfect companion piece to the increasingly twisted ‘Weeds,'" as it "straddles the worlds of drama and comedy with confidence and gutsy gusto." For those who don't waste their money on Showtime, "Weeds" is a "comedy" where a suburban housewife is a drug dealer pushing marijuana instead of Avon.

There is no doubt these two shows are a match in blackness.

Nancy Franklin of the New Yorker claimed the new show "feels truer to life than the zillions of one-dimensional (or no-dimensional) nurses on television. It's not just corrective medicine, though -- it actually tastes good."

Let me tell you what The New Yorker thinks "tastes good." In the first episode, Jackie and her gay Muslim male nurse friend are laying in the pews of the chapel of All Saints Hospital where they work, looking at a painting of a beheaded John the Baptist. The male nurse says, "What does one offer as a side dish when serving John the Baptist's head on a platter?" Jackie plays along: "Coleslaw. No -- mac and cheese. No -- potato salad."

If that "actually tastes good" to you, then you should be a TV critic.

Religious themes -- actually anti-religious themes -- surface routinely. In the show's debut, Nurse Jackie lays on the floor, recalling that her schoolteacher Sister Jane du Chantal taught her that those with the greatest capacity for good also have the greatest capacity for evil. "Smart f--ing nun," Jackie says. Viewers will be treated to both sides of Jackie, but the good stuff that emerges only salves the conscience so the viewer can enjoy the evil parts.

Later, a nursing student following Jackie wonders if God is some kind of sadist who wants a certain finite amount of suffering to be spread around the world, that in every place where pain has been alleviated, God imposes it somewhere else. Then she tells drug-addicted, adulterous Jackie, "I think you're a saint."

On her way home, Jackie says in a voice-over that if she were a saint, she'd be like St. Augustine, since he wasn't going to give up his earthly pleasures until he was good and ready. She says, "Make me good, God -- just not yet."

That's not a bargain with God. That's a Hollywood mantra.

Showtime thinks all the fun in "Nurse Jackie" comes when the nurse plays God. She forges a dead man's driver's license to make him an organ donor. She robs a rich doctor to give to that dead man's poor and pregnant girlfriend. She takes the severed ear of a woman-beater and flushes it down the toilet.

As The New Yorker put it, "She has a habit of throwing the ethical rule book away, and the cascade of consequences is hugely entertaining and often unexpectedly funny." Another one of those allegedly hilarious consequences comes when she hides her powdered narcotics in an artificial-sweetener packet, and her boss, anxious to find an artificial sweetener, takes and ingests the drugs in her coffee.

Showtime clearly wants the audience to embrace Jackie and her drug-fogged moral sense. As one slightly less impressed TV critic put it, she is "the health-care equivalent of the whore with a heart of gold." Tom Shales of the Washington Post not only praised the show, but praised the morality of the main character, and how her "years of experience and her highly developed sensitivities are tools she uses to cut to the chase, cut through red tape and cut around middlemen and other gratuitous obstacles planted in her path." In other words, every law she breaks is justifiably broken.

None of these TV critics would want to end up in the hospital in real life and answer "yes" to the question "Would you like your nurse to be whacked out on Oxycontin?" In real life, we'd want this woman to go to rehab, and then to marriage counseling. But anything approaching the right moral course would completely ruin all the "black comedy" fun Showtime is having.