We Must Stand Up to Leftist Extremism

Bradley Mattes
|
Posted: Sep 29, 2018 12:01 AM
Share   Tweet
The opinions expressed by columnists are their own and do not necessarily represent the views of Townhall.com. 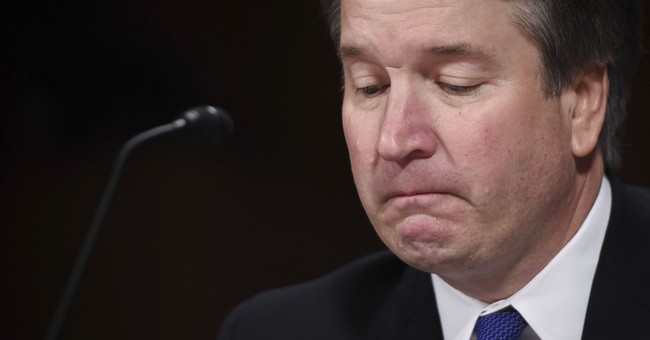 Thursday’s confirmation hearing was unlike any other in modern history.  Countless Americans watched spellbound during the testimonies and questioning of Dr. Christine Blasey Ford and Judge Brett Kavanaugh. Many agree that Dr. Ford was likely a victim of a sexual assault, but her limited recall of the facts, and particularly the refutations of her named witnesses, provided ample room for doubt that Judge Kavanaugh was involved.

Many of those who awaited Judge Kavanaugh’s opening statement were looking for courage, resolve and passion. And they were not disappointed. It was a relief when he boldly stated that he would not be intimidated into pulling his name from consideration.

The reason for this relief is twofold. First, if Judge Kavanaugh, the Senate or the American people give in to the antics of the extreme Left, it will be open season on future nominees who adhere to the letter of the Constitution. Without determined courage and resolve now, we will be throwing them to the wolves.

American voters, including crucial independents, watched the verbal assaults against Judge Kavanaugh with dread, fearing for the rights of husbands and sons if the radical Left succeeds.

Second, the long-cherished constitutional right of due process and presumption of innocence is facing a full-frontal attack. Shockingly, Senators Chuck Schumer, Chris Coons, Kirsten Gillibrand and Mazie Hirono actually placed the burden of innocence on Judge Kavanaugh. If their opportunistic philosophy were to prevail, a Pandora’s Box of unseen proportions would be opened and unleashed on the political and judicial landscapes.

Judge Kavanaugh directed his wrath toward Judicial Committee Democrats. And with good reason. The Left in the Senate, he said, were hellbent on a “search and destroy” mission, not advise and consent. He and his family have been brutally attacked and his unblemished reputation forever tarnished.

In the wake of his interview with Fox News, Judge Kavanagh was criticized for his lack of emotion. Then, after exhibiting a strong passion and resolve during the hearing, he was accused of having the wrong judicial temperament to serve on the nation’s highest court.

Senator Lindsey Graham voiced the opinion of millions when he accused his Democratic colleagues of attempting to hold the Court vacancy open until after the election, when they might be in a better position to stop the Judge. Senator Graham added, “I can’t think of a more embarrassing scandal for the United States Senate since the McCarthy hearings.” This judicial witch hunt must be stopped in its tracks by the Senate Republican majority if they want to stay in the majority.

Planned Parenthood’s statements in support of Dr. Ford and other victims of sexual assault dripped with hypocrisy. This kingpin of the abortion industry has a well-documented history of aiding and abetting sexual predators. They reap financial gain by aborting the babies of young, minor girls while covering up these heinous crimes.

This recent hearing has been more than an attack on Judge Kavanaugh – it’s a mugging of the judicial system itself and is a flawed political strategy at its most fundamental level.

The Left has undoubtedly alienated Judge Brett Kavanaugh and a vast segment of voters. But the damage may be much more extensive. Current Supreme Court justices were disgusted by what they witnessed. Justice Ruth Bader Ginsburg called it a “highly partisan show.” Justice Elena Kagan said the process makes Supreme Court justices look like “junior varsity politicians.”

How could these extreme politicians think this was a winning strategy?

Congress and the American public must continue working and praying for justice – wherever it resides. Considerable evidence points in the direction of the nominee.