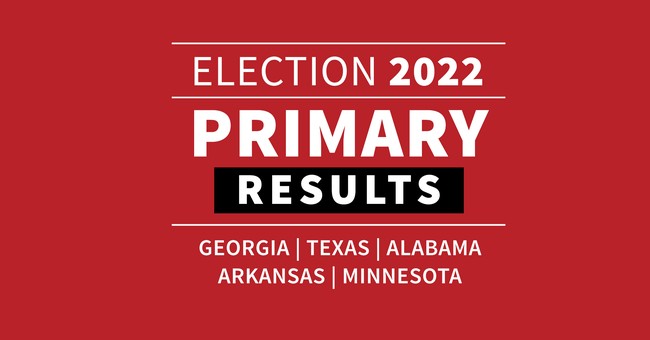 Party loyalists on both sides of the aisle turned out in several key states on Tuesday to vote for their preferred candidate to take on the opposing party in November's consequential midterm elections — even as results from a handful of last Tuesday's primaries remain uncalled or too close to call, as is the case in the muddied Pennsylvania GOP Senate primary.

From runoffs in Texas to a special primary in Minnesota's 1st Congressional District to Georgia's gubernatorial GOP proxy battle between Trump-endorsed David Perdue and Pence-endorsed Brian Kemp, there's a lot of key races playing out on Tuesday evening that will determine the matchups that will eventually be part of deciding which party controls Congress beginning in January 2023.

Former White House Press Secretary Sarah Huckabee Sanders is a shoo-in for the Arkansas GOP gubernatorial contest, setting her on a path to winning in November's general election in the deep red state.

The GOP primary for U.S. Senate, on the other hand, is a messier situation. Incumbent Senator John Boozman is facing a challenge from former NFL player Jake Bequette and conservative commentator Jan Morgan.

Over in Alabama, there are a handful of contentious GOP primaries playing out Tuesday evening, including the contest to replace retiring GOP Senator Richard Shelby. In that race, Rep. Mo Brooks initially earned President Trump's endorsement, before losing it.

There's also a special primary taking place in Minnesota on Tuesday to choose contenders for the race to replace the late GOP Rep. Jim Hagedorn, who represented the North Star State's 1st Congressional District until he lost his battle with cancer earlier in 2022. His widow, Jennifer Carnahan, is running in the primary field despite swirling controversies that saw her step down from her role as the chair of the state Republican Party.

For the rest of what the Townhall team is watching, see our preview post here. As always, live results in all the key races from Alabama, Georgia, Texas, Arkansas, and Minnesota will be posted below as polls close and votes are counted.