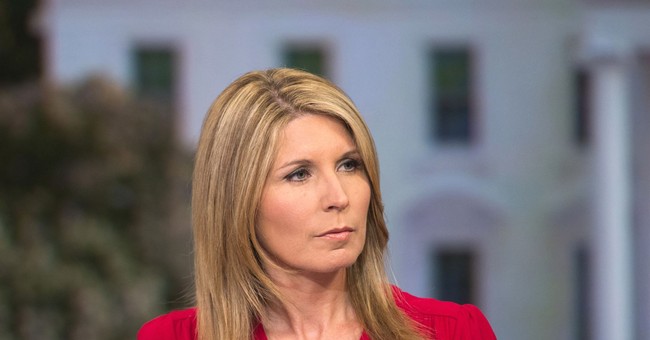 In Thursday's installment of her MSNBC Show "Deadline: White House," Nicolle Wallace had what the mainstream media would likely consider a brilliant idea to reduce the number of shootings taking place in America: simply make illegal guns... more illegal. And Wallace is apparently peeved that Democrats haven't thought of taking such action before.

"If the Supreme Court has green-lit vigilantism," Wallace claimed, "why hasn't the left come out with laws about illegal guns?" she questioned. Yes, really:

MSNBC’s @NicolleDWallace: "Why doesn’t the left come out with laws [against] illegal guns?" pic.twitter.com/lwsnRwcJjR

First, how does she think a gun becomes illegal? Laws, of course. So the firearms she's speaking of have already had laws passed prohibiting their ownership within the Democrat cities or states she's now urging to, again, make them more illegal.

She repeatedly used the term "illegal guns" and once invoked spookily named "ghost guns" in her inquisition about why Democrats haven't passed laws similar to the pro-life abortion restrictions enacted by conservative lawmakers — ones Wallace called "vigilante" laws.

So, Wallace wants Democrats who have already passed laws outlawing certain firearms to make those guns more illegal and allow everyday citizens the ability to do what — seize them from other citizens? It's illogical, probably unconstitutional, and a recipe for even more shootings. You know who has illegal guns? Criminals. And, with Chicago, New York, Washington, and Los Angeles as examples, those criminals in possession of illegal guns don't usually hand them over or go down quietly.

What Wallace ignores is that the firearm restrictions in anti-Second Amendment jurisdictions fail to actually get guns off the streets or out of the hands of criminals. That's why they don't work. The strict regulations in cities like Chicago haven't reduced the incidence of gun violence, nor are they particularly effective when it comes to criminals being convinced to suddenly become law abiding citizens. In countless examples from tragic attacks, it is a failure of government — the ones who pass the restrictions and then subsequently fail to enforce them — and not the Second Amendment that is to blame. After all, if the restrictions weren't in place, then law abiding gun owners could be on hand to use their firearms both as a deterrent before an attack or to stop an active shooting already in progress.

As Leah reported earlier this week, it seems the alleged Buffalo shooter chose a location in New York due to its strict anti-Second Amendment gun control laws:

While it has not yet been confirmed, the alleged killer, Payton Gendron, left a 180-page manifesto that details his beliefs and plan for the shooting. In it, he said New York was ideal given its restrictive gun laws, which meant there was a good chance his victims were sitting ducks or if they weren't, hardly had the capacity to stop him.

Wallace and the rest of her MSNBC compatriots don't really care about stopping gun violence — if they did they would take the alleged shooter's word and immediately pass laws to incentivize law abiding gun owners to carry firearms to dissuade future attacks. The more good guys there are with guns, the higher the risk for any potential shooter. Instead, Wallace is focused on making already illegal guns more illegal, something that's necessary only when gun-grabbing governments fail to enforce the laws they pass that end up punishing legal firearm owners.