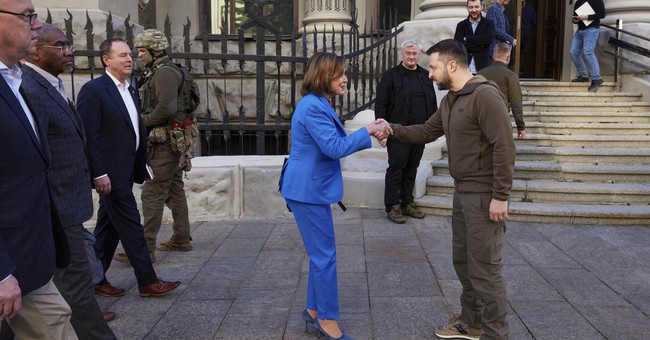 After Senator Rand Paul (R-KY) slowed the progress of yet another Ukrainian aid package to the tune of $40 billion by objecting to unanimous consent earlier this week, the Senate voted to move forward with a final vote on the legislation on Tuesday evening. Ultimately, all Democrats and a majority of Republicans voted to move the legislation forward while 11 GOP senators voted against the measure until more assurances could be provided and issues at home received the attention they deserve.

Senator Paul's initial objection was over the lack of accountability in how the taxpayer funds would be spent in Ukraine, and he sought to have U.S. oversight on how the money was eventually used amid Putin's invasion of Ukraine. By Tuesday evening, ten additional Republicans joined him in opposing the legislation.

Explaining his opposition to the $40 billion legislation, Senator Josh Hawley (R-MO) pointed out that the legislation is "not national security, it's nation building. I mean this is right back to the failed policy in Afghanistan and Iraq where we are literally funding the Ukraine government," he reminded. "This legislation would write a check for $9 billion directly to the Ukrainian government that's in addition to all of the other money," Hawley said. "I'm not for nation-building, I'm for putting the national security of the American people first."

The Heritage Foundation's James Carafano wrote in an op-ed just before the vote how the $40 billion "package is too large, too bloated, and completely lacking in strategy," adding that "Biden, Pelosi and Schumer are forcing Americans to choose between advancing our interests abroad and governing responsibly here at home." Here are the problems Heritage's experts identified in the bill:

First, House leaders gave members only a few hours to review the proposal before voting. This should be a red flag to everyone that there are problematic proposals buried in this spending package that leadership didn’t want Americans to have time to find.

Second, even as inflation surges to record highs and Americans are suffering from higher prices on just about everything, Washington cannot seem to curb its addition to reckless spending that isn’t offset.

Principled objections to the bill’s price tag have been met with scorn by many in the Washington establishment, for many of whom "fiscal responsibility" is a little more than a bumper-sticker slogan. The stock answer in Washington is that the current crisis is too important to honor previous promises or pass needed reforms. That’s why nothing changes.

Adding insult, Congress is spending even more money than the president requested.

Across the board, the way this administration and Congress spend money—without accountability, transparency, or making offsetting cuts—is morally wrong and fiscally foolish.

Third, while the bill contains important spending that will bolster Ukraine’s defenses, it also authorizes nearly a billion dollars in unlawful immigration benefits, and roughly $9 billion for things like funding Ukrainian government officials’ salaries and pensions.

"We want the U.S. government to support the people of Ukraine, help them repel Russians, and project American power in a way that sends a signal of strength and resolve to Moscow, Beijing, and our other global adversaries," Carafano noted of the Heritage Foundation's position. "It is hard to do so, however, when our leaders in Washington put forward proposals that spend billions of dollars we don’t have on things the American people don’t support," he added.