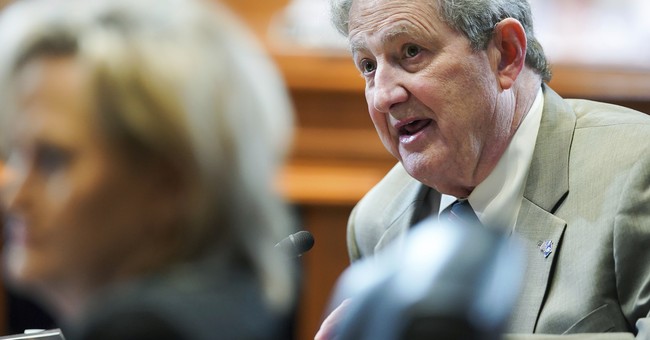 "You can lead a man to the presidency, but you can't make him think," Senator John Kennedy (R-LA) said on Fox News Tuesday morning during an interview about a resolution he and GOP colleagues introduced to get the Biden administration to focus on the real crises facing Americans.

"What our resolution is intended to do is to try to get the Biden administration to focus on those issues that moms and dads are worried about when they lie down to sleep at night and can't," Senator Kennedy said. "Things like crime, things like the border, inflation, the baby food shortage."

The resolution, introduced in the Senate on Monday, is aimed at "[u]rging the development of a strategy to counter the rise in violent crime across the United States" and "points out that the murder rate in America rose by 30 percent from 2019-2020, the largest single-year increase in more than a century" while highlighting "a 59 percent increase in the number of police officers murdered last year" and noting at "[a]t least 16 American cities set record for the number of murders in 2021."

The resolution also calls President Biden and his party for the border crisis that rages unaddressed and mostly unacknowledged. "More than 2.5 million illegal immigrants have been caught trying to cross the U.S. southern border since January 2021, and overdose deaths have reached an all-time high as the flow of illegal drugs across the southern border is putting communities at risk across America," the resolution also notes.

KENNEDY: "You can lead a man to the presidency, but you can't make him think...the second group that he has running the show...I would describe as the crunchy granola types who like to attend gender reveal parties." pic.twitter.com/3pEvKYiM4s

"I think most Americans understand that in its first 14 months, the Biden administration has not exactly rocked it," Senator Kennedy further explained on Fox News on Tuesday. "The president, I think, has delegated an enormous amount of his responsibilities to his appointees," Kennedy noted.

Biden appointees, Kennedy explained, are "an interesting mixture of two groups," described by the Louisiana Senator as "a bunch of uber-Washington insider elite types who mentally- haven't been out of Washington mentally- for more than ten minutes in their lives," he said. "They think Washington is America, and America is Washington," Kennedy added of the insider elites running the Biden administration.

"The second group that he has running the show, and there is some overlap," Kennedy noted, "I would describe as the crunchy granola types who like to attend gender reveal parties. I mean they're very, very woke and they're just not focused on the issues that are worrying ordinary Americans right now," he said.

These groups that Biden has delegated his authority to, Kennedy explained, "believe in government by experts, and they think they're the experts, and they're smarter than ordinary Americans, and they're more virtuous — and that everybody ought to shut up and listen to them — and if we're nice, they'll let us eat meat occasionally."