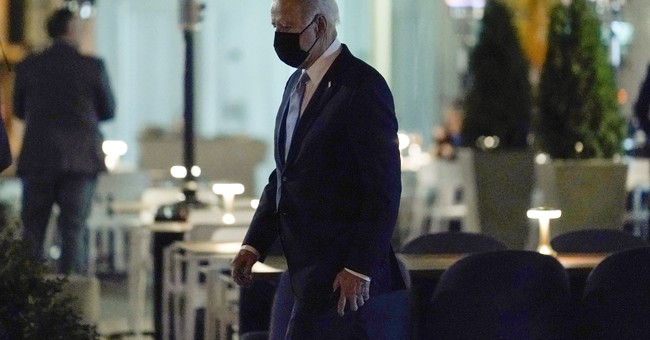 As Leah reported earlier, President Biden has more or less thrown in the towel on his administration's effort to get the Wuhan coronavirus under control saying "there is no federal solution."

It's just the latest in a string of broken promises from Biden and his administration, and one of the biggest and most frequently repeated while campaigning for the presidency. But despite his frequent pledge to "shut down the virus" instead of the country or the economy, Biden has well and truly failed to shut down the Wuhan coronavirus.

Let's take a walk down memory lane to review just how insistent, no matter how delusional, Joe Biden was that he would be the one to somehow control a virus. The video below, tweeted by Christina Pushaw, frames the overpromised and under-delivered reality in which broken promises Biden now finds himself:

What a difference a year makes ?? pic.twitter.com/IGF7A3Kp4e

Biden exploited the virus he's now realized can't be managed to attack then-President Trump during the campaign, claiming that his predecessor's actions were to blame for spikes in cases because, as Biden asserted, Trump didn't have a plan.

Donald Trump still doesn’t have a plan to get this virus under control. His failure to lead is costing American lives.

In reality, Trump did have a plan. Operation Warp Speed developed and churned out vaccines. He used emergency powers to spur manufacturers to make more ventilators and masks. He restricted travel from China to slow COVID's entry into the United States. President Trump got America ready to face the COVID storm as best anyone could.

As it turns out, it was Biden who didn't have a plan that works. Even worse, he doesn't think the federal government is able to have a solution at all. He now apparently views the Wuhan coronavirus as a problem for states to handle. So much for his claim that the "buck" stops with him.

So all that talk on the campaign trail, all the federal mandates and restrictions, were for naught? I admittedly didn't have Joe Biden embracing federalism to respond to COVID on my 2021 bingo card.

Even as recently as December 12, before saying the federal government couldn't fix the pandemic, Biden was tweeting about his administration's plan:

And that was just the most recent posturing Biden engaged in related to the Wuhan coronavirus. There are dozens more tweets like this aimed at reassuring worried Americans that Biden had a plan to shut down the virus and move on to building back better.

Today, I announced my COVID-19 National Action Plan. We're mounting an aggressive, coordinated, equitable, and professional response to get the virus under control as soon as possible.

These broken promises about shutting down the virus rather than the country or the economy are just some of many Wuhan coronavirus-related promises from Biden on which he backtracked. From the promise that getting vaccinated would allow Americans to ditch their masks to assuring Americans that vaccination wouldn't be enforced with a federal mandate, it's clear that any illusion of a plan from Biden is merely a mirage.