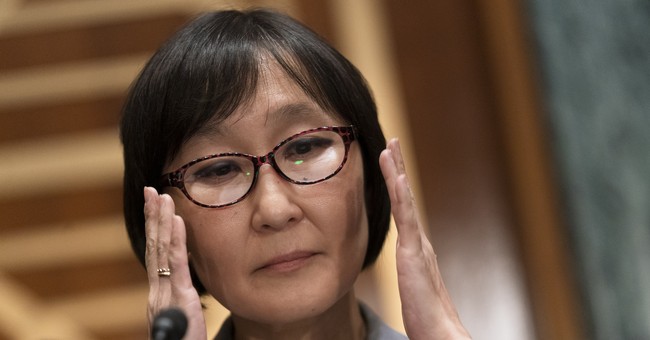 Following disastrous testimony before the Senate earlier this fall, Saule Omarova pulled herself out of contention to lead the Office of the Comptroller of the Currency on Tuesday, with President Biden agreeing to his nominee's request to officially withdraw her nomination.

President Biden has accepted Saule Omarova's request that her name be withdrawn for the nomination for Office of the Comptroller of the Currency, per a statement from him.

President Biden explained the decision in a statement released on Tuesday afternoon that is heavy on spin and light on facts about his nominee's many controversial writings and statements about the American banking system and fossil fuel companies, among other issues:

I have accepted Saule Omarova's request to withdraw her name from nomination for the Office of the Comptroller of the Currency. I nominated Saule because of her deep expertise in financial regulation and her long-standing, respected career in the private sector, the public sector, and as a leading academic in the field. She has lived the American dream, escaping her birthplace in the former Soviet Union and immigrating to America, where she went on to serve in the Treasury Department under President George W. Bush and now works as a professor at Cornell Law School.

As a strong advocate for consumers and a staunch defender of the safety and soundness of our financial system, Saule would have brought invaluable insight and perspective to our important work on behalf of the American people. But unfortunately, from the very beginning of her nomination, Saule was subjected to inappropriate personal attacks that were far beyond the pale. I am thankful to Chairman Brown for giving her a fair hearing and the opportunity to demonstrate her qualifications.

The Office of the Comptroller of the Currency is a critical agency, supervising and regulating about 1,200 national banks in the federal banking system. I will continue to work to find a nominee for this position and plan to make an announcement at a future date.

As Townhall covered from the time Biden first announced his nominee for the Office of the Comptroller of the Currency, Omarova was a radical choice to be in charge of such a critical office within the federal government.

And, contrary to Biden's claims about criticism of Omarova's track record and public statements, Senator Tim Scott (R-SC) set the record straight when she appeared before the Senate:

Senator Tim Scott (R-SC) to Biden's Comptroller of the Currency nominee: "I don't have any questions for you because there's nothing you can say today to undo what you've said for years, including this year." pic.twitter.com/ygIKJWkRZj

Whatever Biden may say to make the withdrawal of his nominee about the "beyond the pale" attacks she supposedly faced doesn't change the fact that Omarova wanted to bankrupt fossil fuel companies to address climate change, and have the Federal Reserve control Americans' private bank accounts.

Saule Omarova is an unqualified Marxist who wants energy companies to "starve."

Her defeat is a loss for Joe Biden but a win for the American people.