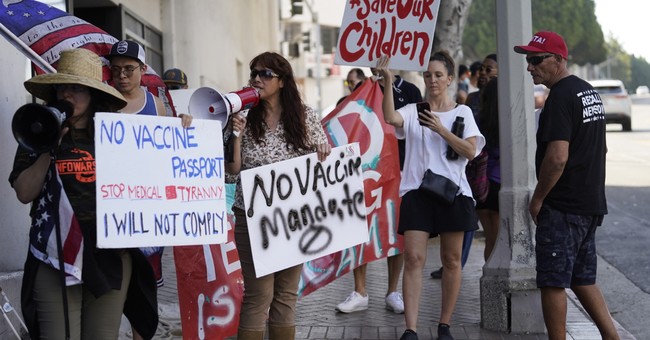 A  shocking percentage of Democrats support the enactment of tyrannical Covid-19 measures on unvaccinated people, according to a Heartland Institute and Rasmussen Reports poll released Thursday.

Well, maybe "shocking" isn't the correct term given that we're dealing with hypochondriac, authoritarian leftists drunk with power. Still, when nearly half the members of the ruling political party literally want to see unvaccinated people digitally tracked and forced into "designated facilities," it's definitely cause for concern.

– Fifty-eight percent (58%) of voters would oppose a proposal for federal or state governments to fine Americans who choose not to get a COVID-19 vaccine. However, 55% of Democratic voters would support such a proposal, compared to just 19% of Republicans and 25% of unaffiliated voters.

– Fifty-nine percent (59%) of Democratic voters would favor a government policy requiring that citizens remain confined to their homes at all times, except for emergencies, if they refuse to get a COVID-19 vaccine. Such a proposal is opposed by 61% of all likely voters, including 79% of Republicans and 71% of unaffiliated voters.

– Nearly half (48%) of Democratic voters think federal and state governments should be able to fine or imprison individuals who publicly question the efficacy of the existing COVID-19 vaccines on social media, television, radio, or in online or digital publications. Only 27% of all voters – including just 14% of Republicans and 18% of unaffiliated voters – favor criminal punishment of vaccine critics.

– Forty-five percent (45%) of Democrats would favor governments requiring citizens to temporarily live in designated facilities or locations if they refuse to get a COVID-19 vaccine. Such a policy would be opposed by a strong majority (71%) of all voters, with 78% of Republicans and 64% of unaffiliated voters saying they would Strongly Oppose putting the unvaccinated in “designated facilities.”

– While about two-thirds (66%) of likely voters would be against governments using digital devices to track unvaccinated people to ensure that they are quarantined or socially distancing from others, 47% of Democrats favor a government tracking program for those who won’t get the COVID-19 vaccine.

How far are Democrats willing to go in punishing the unvaccinated? Twenty-nine percent (29%) of Democratic voters would support temporarily removing parents’ custody of their children if parents refuse to take the COVID-19 vaccine. That’s much more than twice the level of support in the rest of the electorate – seven percent (7%) of Republicans and 11% of unaffiliated voters – for such a policy.

Yep, you read that right. Almost a third of Democrats want to take your children if you are unvaccinated. Let that sink in. Now imagine what the U.S. would be like now if Donald Trump hadn't won in 2016 and Democrats controlled the Supreme Court.

I don't think it's far-fetched to say that if Donald Trump hadn't won in 2016 and appointed three SCOTUS justices, the U.S. would literally be Australia right now.

While the percentage of Republicans who would enact such ridiculous and tyrannical measures is thankfully low, it's still way higher than what it should be ... which is zero!

The survey consisted of both telephone and online polling of 1,016 likely voters and was conducted January 5, 2022, with a margin of sampling error of +/- 3 percentage points and a 95% level of confidence.