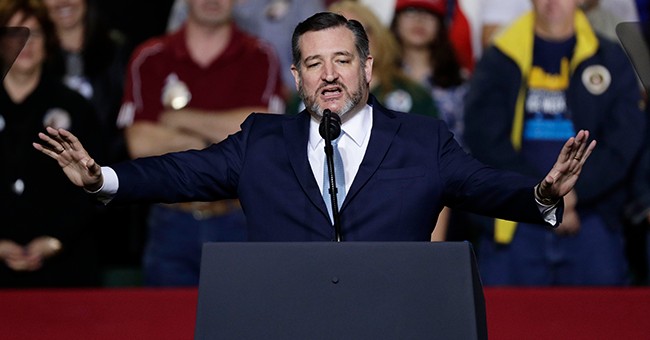 Sen. Ted Cruz (R-TX) put President Joe Biden on full blast for his “open-border policies” while addressing the “suffering, chaos, and misery” his administration has caused.

During a press conference, Cruz called out the “Democratic Hypocrisy” consisting of Biden and Vice President Kamala Harris for implementing policies that have resulted in a “man-made” crisis bringing in millions of illegal migrants, deadly drugs and sex trafficking into the U.S.

Cruz called on Biden and Harris to take a trip to the Rio Grande Valley to see first hand the mess their “Biden cages” have created.

“We’ve seen Democrat hypocrites go on and on about kids in cages when President Trump was president. They never mentioned that Barack Obama built the cages and the cages are bigger and more full under Joe Biden,” Cruz said.

The senator also said that Democrats will do anything if it helps them win elections calling it “cynical” because “their view is if more children have to be physically and sexually assaulted to help them at the ballot box, so be it.”

The #BidenBorderCrisis is a man-made crisis created by Joe Biden and Kamala Harris! pic.twitter.com/JveOH4xu4v

Americans are dying from fentanyl and little boys and girls are being trafficked.
#BidenBorderCrisis. pic.twitter.com/rll5alUFGz

.@LindseyGrahamSC and I serve on the Senate Judiciary Committee.

We have had 0 hearings on the crisis at the southern border.

The only thing Senate Democrats care about is more amnesty because they view each illegal alien as a future Democrat voter! #BidenBorderCrisis. pic.twitter.com/dNXhqldLMz

Meanwhile Sen. Lindsay Graham (R-SC) is threatening to stall the confirmation process for Biden’s picks to lead federal agencies if he doesn’t go and visit the border.

“President Biden, if you do not go to our border to visit firsthand and see what's going on and to hear from the Border Patrol agents themselves, you're letting down your country, you're derelict in your duty, and there will be repercussions for — for that lack of interest — here in the Senate,” Graham said.

Graham is holding his ground as the crisis at the border has exceeded in the last couple of months, vowing that processing nominations will be different for him until the President does his job in fixing the problem he created.

According to the Washington Examiner, over 239,416 illegal aliens have crossed the border within the last month, which is the fourth consecutive monthly rise.