Sen. Kennedy Grills Fed Chair Over Inflation: 'We Got a Hell of a Mess' 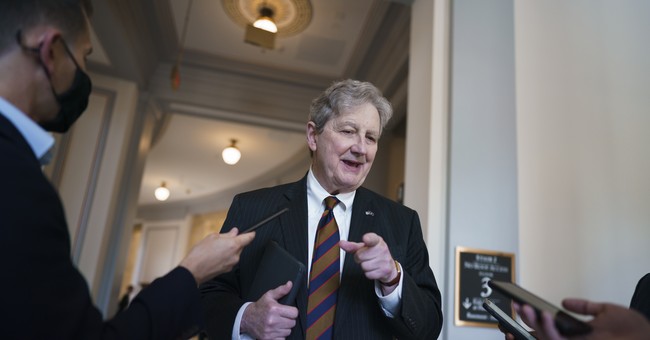 Americans are struggling to pay for everyday essentials as prices have soared exponentially at the grocery store and gas pumps since the annual inflation rate hit 8.6 percent in May, the highest in over 41 years.

The U.S. wants answers for how the Biden administration is going to fix the crisis they have caused.

Republican Senator John Kennedy put all of America’s frustrations on the table over inflation and the state of the economy during a senate hearing.

Kennedy lashed out at Federal Reserve Board Chair Jerome Powell for the lies and false hopes that President Joe Biden has given to the American people.

“Look, Mr. Chairman, we got a hell of a mess here… inflation is hitting my people so hard they are coughing up bones.”

Kennedy said the U.S. is not buying Biden’s claims about the positive outlook of the economy.

“President Biden, I don’t blame him, I understand politics, he keeps saying, well, your 401(k) has crashed, and gas has gone from $2 to $5 a gallon because the economy is so good,” Kennedy said, adding “the American people know that is not true.”

The senator then asked Powell if he can also lower demand but increase supply, to which Powell said “yes” after acknowledging that the Fed was trying to “slow down growth” amid the high inflation.

“We have inflation, duh,” was Kennedy’s response after blasting the Biden administration for injecting trillions of dollars into the economy and then being surprised at the the crippling inflation as a result.

"We have inflation, duh!"