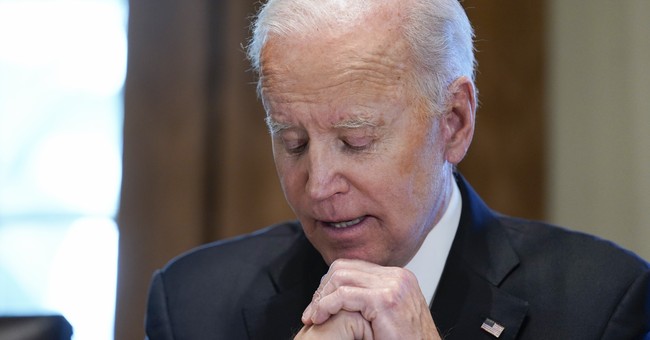 As we're now less than six months away from the November midterms, the already precarious situation the Democrats find themselves in continues to get worse. Per historical trends, the president's party tends to lose seats during his first midterm election, and President Joe Biden's poll numbers certainly aren't helping. In fact, they're at the lowest they've been according to some polls, to be explored in another article.

Namely, the president continues to poll poorly among Hispanic voters. According to a Quinnipiac poll released on Wednesday, just 26 percent of the demographic approve of how the president is handling his job. Sixty percent disapprove.

The only other demographics which are harsher on Biden include Republicans (with a 5 percent approval rating), and the 25 percent of those without a college degree. Biden is similarly faring poorly with those 18-34 years old, as just 27 percent approve.

This figure among Hispanic respondents is particularly noteworthy considering that it was at 55 percent in Quinnipiac's poll from last year.

"Hispanics" was trending on Twitter for Friday, as people reacted to how poorly the president is doing with a key demographic.

Notice something else in Quinnipiac poll? Biden job approval 26% among Hispanics. 26%. Playbook not working... https://t.co/H8eP1yliL7 pic.twitter.com/fnDEkejUtE

Biden’s approval rating among Hispanics is down to 26%. One year ago it was 56%. I think they are realizing what’s going on.

MUST BE SYSTEMIC RACISM!!!

As Not the Bee and our friends at Twitchy quipped, perhaps the Biden administration needs to try harder when it comes to appealing to the demographic when it comes to using the term "Latinx" more, which only 1 percent of Hispanics actually use.

These poll numbers are very much a sort of déjà vu for the president among such key groups. Last month, as Spencer and I covered, the president was similarly performing as poorly among these demographics.

While just 26 percent of Hispanics approved of how Biden was handling his presidency according to April's Quinnipiac poll, 54 percent disapproved and 20 percent didn't know. More Hispanics are becoming more sure over time, it seems, and they're disapproving at increasing rates. The Quinnipiac poll had Biden at a 21 percent approval rating among those 18-34 years old.

A Gallup poll from April showed that for Generation Z, those born between 1997 and 2004, the president was at an approval rating of just 39 percent for September 2021-March 2022, making for a drop in 21 points since Biden first took office.

The Republican Party is also looking to continue making inroads with Hispanics. Earlier this week, as I covered, House Republicans launched the Hispanic Leadership Trust with leadership and Rep. Tony Gonzales (R-TX).