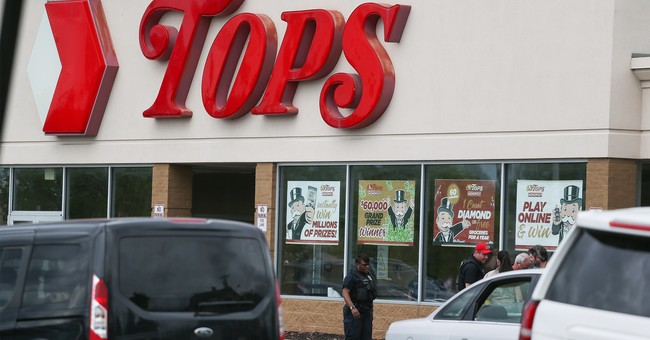 Trends over Twitter to do with Gendron's motives included "Great Replacement" and "Tucker Carlson," as some took to blaming the Fox News host for the shooting. It's worth emphasizing, though, that the suspect's own manifesto not only included no mentions of Carlson, but attacked 21st Century Fox for hiring Jewish people.

The suspect expressed many anti-Semitic views, from what screenshots and excerpts are available.

Twitter bans people for linking to these documents even though it helps us understand what is true and what isn’t.

I can’t post it but what I said above is true and verifiable.

The killer's manifesto attacks Fox News but feel free to continue exploiting people being murdered for some likes and retweets https://t.co/7n27fdlxfw pic.twitter.com/JOKCga9w6R

Disgusting and insane that Democrat operatives are already exploiting the murder of 10 by blaming Tucker Carlson and Fox News.

The manifesto cites the internet (specific websites) as his inspiration (not TV)—and has an antisemitic meme attacking Fox News.https://t.co/kboxiRSm7P https://t.co/yUxhQCjTpI pic.twitter.com/aqt9jsUlxF

Joe Lockhart, who is actually a communications person, said that there was "blood on the hands" of Carlson, and that "Carlson will be [damned] at judgment day." He subsequently tweeted glee over the remarks he was getting as people called him out.

More blood on the hands of @tuckercarlson and @foxnews this killer used their racist talking points to justify killing 10 people. Carlson won't stop because as he explained to the NYTimes, it's good for ratings. Lives be damned. As Carlson will be at judgement day. https://t.co/fse5bRvEbN

A tweet from Georgetown Professor Don Moynihan did a particularly poor job trying to portray Carlson as a white supremacist by comparing a segment of his to the manifesto.

The gunman who killed at least 10 people in Buffalo is a self-described white supremacist who advocates for the Great Replacement Theory.
He left a manifesto. See if you can tell the difference between it and standard fare on the Tucker Carlson show. https://t.co/ScoxO1NG5E pic.twitter.com/T5mZw9iV9C

Then there's more of the usual suspects, such as The Lincoln Project's co-founder Rick Wilson and Brooklyn Dad Defiant.

The Buffalo killer’s manifesto reads like a job application for a junior producer on Tucker Carlson.

And no, I’m not being flippant.

Carlson, and Fox News, have blood on their hands.

Many pushed back, though, with something called facts.

The 180 page "manifesto" left by the shooter shows zero "Tucker" "Tucker Carlson," or "Carlson" mentions. The document is sick, and the shooter claims to be an authoritarian leftist.

It doesn't matter that Tucker wasn't mentioned or that the shooter explicitly attacked Fox News, the worst people on the planet will always twist and contort every tragedy to fit the same exact pre-determined narrative. https://t.co/aTFgoSJWYG

The guy expressed his hatred of Fox News in his manifesto. Maybe he watches CNN? If that's so, that means the blood is on your hands, right Joey? https://t.co/D0KcrGJIG9

The killer attacks Fox News in his manifesto. CNN is paying a guy to lie and politicize the deaths of 10 people while their bodies are still warm. https://t.co/hUXVZXRILx

PolitiBunny, who is with our friends over at Twitchy, also got emotional on Twitter as well, as she pushed back against these takes.

supposed to just sit back and ‘tsk tsk’ because somehow defending myself and millions of people like me somehow brings me down to their level? No more. Don’t like it, don’t follow, mute or even block. IDGAF. :)