Joe Biden on 2022 Midterms: 'We Have to Expand Our Majorities,' GOP is 'Completely Controlled' By Trump 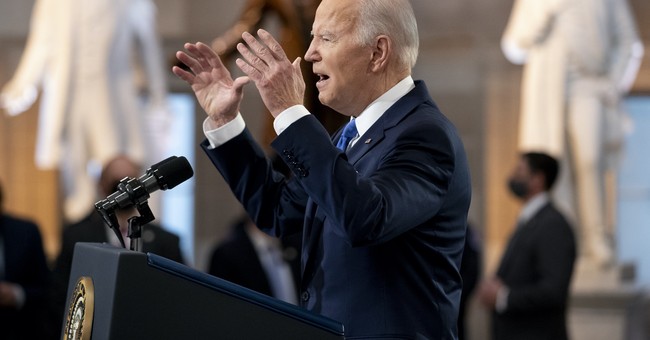 President Joe Biden continues to go with his delusional narrative that Democrats will not only keep control of Congress come the November midterms, but that they will "expand their majority." He does have a point to be hopeful about picking up more seats, as Democratic majorities in both the House and the Senate are in the single digits. But, that's just one of many reasons why the GOP is likely to take control of at least the House, and potentially the Senate as well.

Biden says in the video clip that they're going to elect Democrats up and down the ballot by "telling the voters what we've done and what we plan to do, by making it clear." But, as is the typical Biden way to cause confusion, he doesn't go on to list any real or even perceived accomplishments. Rather, he talks about "a clear choice," and not merely between Democrats and Republicans.

"There's a clear choice," he continued, "a choice between a party that works for people and is focused on the future, and a party that's completely controlled by one man, and is focused on relitigating the past." That last line of the video is clearly a dig at former President Donald Trump.

Such a desperate video comes days after Biden gave a disastrous press conference. It was chock full of blunders, including and especially due to a line early on in the press conference when Biden sowed doubt on the legitimacy of elections.

"I’m not going to say it’s going to be legit" he responded when asked by a reporter about the 2022 midterm elections, as he also spoke of an attempt for Democrats to pass voting legislation that would amount to the federal takeover of elections. The president also doubled down on this point later in the press conference. "Oh, yeah, I think it easily could be — be illegitimate," Biden subsequently said.

REPORTER: "Do you still believe the upcoming election will be fairly conducted and the results will be legitimate?"

BIDEN: "It all depends depends on whether or not we're able to make the case to the American people that some of this is being set up to alter the outcome..." pic.twitter.com/COdhiTEYhh

Subsequent Democratic doubling down didn't help. This is the case despite how it came from the top, including Vice President Kamala Harris, White House Press Secretary Jen Psaki, and Rep. Jim Clyburn (D-SC) who is the third-ranking House member as the majority whip and a key ally of Biden.

Biden didn't preemptively question the legitimacy of the elections in this video clip, but let's not get too excited, as he only had 30 seconds. Plus, it was bad enough.

Democrats have already done enough damage in other ways, by claiming not just that future elections might not be legitimate if voter legislation they support isn't passed, but also making bizarre claims such as how Election Day will become a "charade" or that 2022 could be the last election there is.

It is rich, though, that he would claim it's the Republican Party that wants to "relitigate," considering Biden and the Democrats are the ones bringing Trump up and giving him such attention.