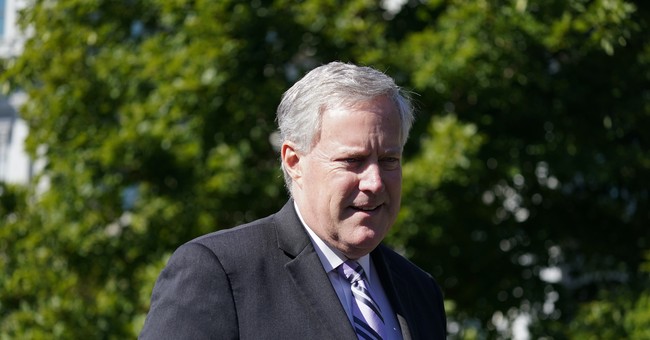 As Harper Neidig summarized for The Hill:

In a civil complaint filed Wednesday afternoon, Meadows's lawyers said the select committee does not have the authority to issue the subpoenas directed at him or obtain his phone records from a third party and that President BidenJOE BIDENHouse passes 8B defense policy billHouse approves bill to ease passage of debt limit hikeSenate rejects attempt to block Biden's Saudi arms saleMORE's refusal to assert executive privilege opens constitutional questions that should be decided through legal action.

"As a result, Mr. Meadows, a witness, has been put in the untenable position of choosing between conflicting privilege claims that are of constitutional origin and dimension and having to either risk enforcement of the subpoena issued to him, not merely by the House of Representatives, but through actions by the Executive and Judicial Branches,  or, alternatively, unilaterally abandoning the former president’s claims of privileges and immunities," the complaint reads. "Thus, Mr. Meadows turns to the courts to say what the law is."

The lawsuit says Meadows believed the committee would "act in good faith" until he learned over the weekend the lawmakers had subpoenaed Verizon for his personal phone records. The telecommunications company told Meadows in a letter dated Saturday that it would comply with the committee's subpoena by Dec. 15 unless a court ordered otherwise.

Meadows’s flawed lawsuit won’t succeed at slowing down the Select Committee’s investigation or stopping us from getting info we’re seeking.

The Committee will meet next week to advance a report recommending that the House cite Meadows for contempt and refer him for prosecution.

This is only one of many recent developments.

On Tuesday, the same day that Meadows' book, "The Chief's Chief," was released, it was revealed that Meadows had decided he would not cooperate with a subpoena he had been served with by the committee after all. The former chief of staff was among the first key figures subpoenaed by the committee in September.

Today, the @January6thCmte learned that Mark Meadows will not further cooperate.

Why he can discuss Jan 6 in a book, but not with Congress, is inexplicable. His deposition will proceed as planned.

If he fails to appear, he will be subject to criminal contempt.

The Select Committee has numerous questions for Mr. Meadows about records he has turned over to the Committee with no claim of privilege, which include real-time communications with many individuals as the events of January 6th unfolded.

If indeed Mr. Meadows refuses to appear, the Select Committee will be left no choice but to advance contempt proceedings and recommend that the body in which Meadows once served refer him for criminal prosecution.

Through a letter from attorneys, Trump urged those subpoenaed not to comply, citing executive and other privileges. Such has been Meadows' defense.

Democrats have reacted to these various recent updates by taking issue with Meadows releasing a book and have speculated that he is trying to run out the clock on being held in contempt.

Bannon’s contempt trial doesn’t take place until July. Mark Meadows knows he can delay his subpoena compliance even longer. They will run out the clock.

This is why we need to pass our inherent contempt legislation NOW. Otherwise, Congressional subpoenas will remain meaningless. https://t.co/YupGszA58s

In October, the U.S. House of Representatives voted to find strategist Steve Bannon, who was also among the first to be subpoenaed, in contempt of Congress. Bannon was soon after indicted by the Department of Justice. He pled "not guilty" and may thus face jail time and fines for not complying with the subpoena.