Yet Another Democratic House Member Has Announced He's Retiring, and This Time It's a Committee Chairman 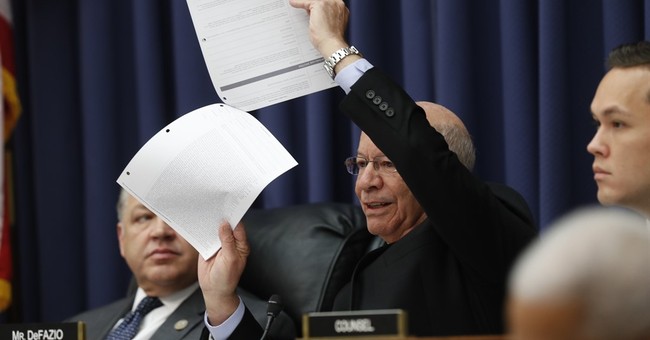 Earlier this week, Rep. Peter DeFazio (D-OR) announced he is retiring from Congress after serving since 1987, and will not run for re-election in 2022. What's particularly telling about Rep. DeFazio is that he currently chairs the House Committee on Transportation and Infrastructure. He's the nineteenth House Democrat to announce he is retiring.

The Congressional Leadership Fund (CLF) addressed the role they played in getting DeFazio to retire, which included a series of ads hitting the congressman for having "grown out of touch" and having "forgotten us" as well as being a "proud co-sponsor" of the Green New Deal.

The 2020 election was actually a close race for DeFazio, especially compared to past races. He won re-election with 51.5 percent of the vote compared to Republican Alek Skarlatos' 46.2 percent. Meanwhile, in 2018, he beat Republican Art Robinson by 56.0 percent to 40.9 percent.

In late October, as Leah reported, Rep. DeFazio was caught having a hot mic moment during a committee hearing when vaccines and FAA mandates came up. DeFazio had called on Rep. Don Young (R-AK), who yielded his time back to Rep. Brian Mast (R-FL), after DeFazio and Mast had been having a tense exchange.

DeFazio could be heard uttering "Oh, you f***ing a**hole," either about Mast or Young, though it's believed to have been Young.

Instead, Democrats close to [DeFazio] say his departure is more of a reflection of the party’s potentially unappetizing future in the minority, particularly as committee leaders see their powers diminished or quashed all together.

DeFazio, whose life's work has been roads, bridges and rail policy, already took a blow from his own party this year when an infrastructure bill he labored to craft was shunted aside during a Senate-driven push. Known as a blunt talker, he didn’t hold back, blasting the Senate bill as “crap” and saying he “could give a damn about the White House.”

But it’s not just the transportation committee. Several Democrats say they have private lists of senior members who they believe could head for the exits between now and next spring. Some, like other committee chairs, would further rattle the caucus and could affect both candidate recruitment and fundraising at a critical time for the party.

Republicans are almost certainly likely to take back control of at least one or both chambers of Congress, as the president's party in power tends to lose seats during his first mid-term election. In the 50-50 Senate, Democrats are only in the majority because Vice President Kamala Harris has the tie-breaking vote. The Democratic' majority in the House is also in the single digits.

President Joe Biden's low approval ratings also factor into the likelihood that Republicans will regain control. RealClearPolitics (RCP) has Biden's approval rating at 42.3 percent while FiveThirtyEight pinpoints it at 42.6 percent.

Last month, House Minority Leader Kevin McCarthy (R-CA) predicted that Republicans could pick up 60 seats. The largest recent gain was when Republicans picked up 63 House seats during the 2010 midterm election, when President Barack Obama was in office.