As China Is Engaging in Target Practice, Pentagon Claims China and Climate Change Are 'Equally Important' 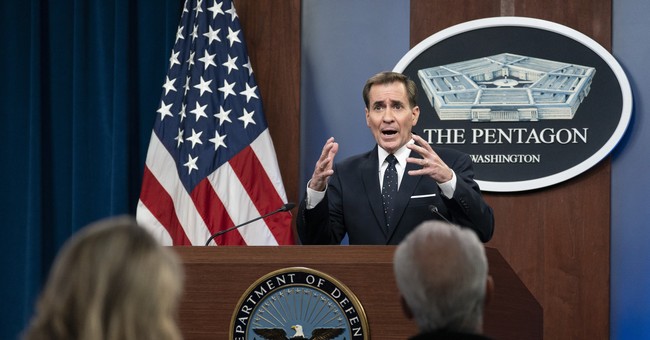 In case it was necessary for the Biden administration to indicate any further just how devoted they are to addressing climate change, or, as they call it, the "climate crisis," Pentagon Press Secretary John Kirby issued a reminder during Wednesday's press conference. When asked by a reporter, "Which is a bigger threat: the climate or China?" Kirby's answer, in part, noted that "both are equally important" and "both are challenges that the secretary wants the senior leadership at the Pentagon to be focused on."

According to the transcript:

Q: And which is a bigger threat, the climate or China?

MR. KIRBY: I think we get paid to examine all the threats to our national security. And I don't know that it does anybody good to put some sort of relative analysis assessment on that. You've heard the secretary talk about the climate as a -- a real and existential national security threat, and it is, not just to the United States, but to countries all over the world. And we considered China as the number one pacing challenge for the department. Both are equally-important. Both are -- are challenges that the secretary wants the senior leadership at the Pentagon to be focused on, as well as many others, too.

Q: Does China take the climate issue as much as the administration...

MR. KIRBY: I think it was disappointing that we didn't see China show up at the COP -- a missed opportunity because -- because they are a huge emitter as well, and a contributor to the kind of climate change that we're seeing. So the short answer to your question is, they didn't show the sort of leadership on climate that they could have and should have.

When pressed further, "If you were to rank the two, climate or China, which would be first?" Kirby responded, "I think I answered your question."

It's worth noting that just before these particular comments, Kirby took the time to stress how important the Pentagon considered climate change in a way that answered a question not even asked.

"The other thing, Lucas, and you didn't ask this but it's important to remind, I mean, we – we believe that climate change is in fact a national security threat because not only the damage that can be done to our own facilities, but the instability and insecurity that it will cause in other places around the world which will no doubt require U.S. military assistance going forward," Kirby stated.

When put in larger context, Kirby's explanation of priorities is even more troubling.

On Tuesday, Spencer had reported on the foreboding news that while President Joe Biden, and a significant amount of his Cabinet members, were at the climate summit in Glasgow, the Chinese engaged in target practice with mock U.S. aircraft carriers.

For China's part, it was discovered that Xi Jinping's military had cobbled together a mock U.S. aircraft carrier along with several other American warships to use for target practice in satellite photos from late October.

According to USNI News, the location where the fake American fleet has been constructed is the same one where the Chinese military previously conducted tests for its "carrier killer" anti-ship ballistic missiles as it continues to threaten Taiwan and others operating within the South China Sea.

At the close of Wednesday's press conference, Kirby was asked his reaction about how "Chinese forces are conducting large scale exercises near Taiwan."

His response was just as disquieting, as he emphasized the exercises "are not uncommon," pointing out it's "the second this year alone." Kirby also emphasized that "I'll let the Chinese speak for their exercises and for their training," including when he was pressed for follow-up.